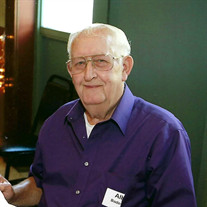 Brodhead – Albert Badertscher Jr., age 85, passed away on July 30, 2021 at the Monroe Clinic Hospital. Albert was born on March 7, 1936 in Brodhead, WI, the son of Albert Sr. and Frances (Green) Badertscher. Albert married Janice Olson on April 14, 1962 at the Orfordville Lutheran Church. Albert worked at age 16 at Freeman Shoe and later served his country in the US Army from 1959-1961. After the service he worked for GM for 6 years and worked on the family farm for 17 years. After his retirement from farming he continued to work for 16 years at Swiss Colony. Albert enjoyed deer and elk hunting, working on cars, especially his 1958 Chevy and working on his lawnmowers and tending to his garden. Albert is survived by his wife, Janice; 3 children, Tony (Kelly) Badertscher, Teri Deremo and Randy “Pud” Badertscher; 4 grandchildren, Samantha (Brandon) Dienberg, Stephanie (Bill) Baker, Amanda Deremo (Nate Behrend) and Justin Badertscher (Kylie Leitzen); 2 step grandchildren, Joshua (Erynn) Hartman and Nathan (Mylissa) Hartman); 9 great grandchildren and many nieces, nephews and other relatives and friends. Albert was preceded in death by his parents, 5 siblings, Werner (Lois) Badertscher, Leila (Alvin) Schwartzlow, Charlene (John) Schwartzlow, Allard (Alice) Badertscher and Dolores (Alvin) Friedrich and one granddaughter, Vanessa Badertscher. In lieu of flowers, memorials can be directed to the family in Albert’s name. Funeral services will be held at the DL Newcomer Funeral Home in Brodhead on Saturday, August 7, 2021 at 12:00 PM. A visitation will also be held at the funeral home from 10:00 AM until 12:00 PM. Burial will conclude at the Greenwood Cemetery in Brodhead. www.dlnewcomerfuneralhome.com 608-897-2484

The family of Albert Badertscher Jr. created this Life Tributes page to make it easy to share your memories.

Send flowers to the Badertscher family.