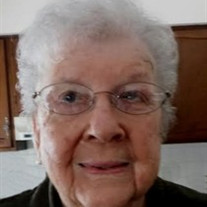 On September 28, 2014 at 2:39 p.m., Mom went to heaven. At the end of her life she was strong and vulnerable; she was tired and tireless, determined and also ready to surrender to God. She did it all, she lived it all, and she loved us all. We loved her. Alma Ross, 91, of Brodhead, passed away at her home. She was born on November 3, 1922 in Waukesha, WI, the youngest daughter of Benjamin and Alma (Teuteberg) Kern. Alma graduated from Waukesha High School in 1941. She worked on the electric junction bomb boxes for the 1925 airplanes during the war. Alma married Robert J. Ross of Marquette, MI on August 13, 1949 in a Candle Light Ceremony in Waukesha. They were married in August because that the was the month her Mom and Dad were married and she loved the month of August. Alma and Bob celebrated 65 years of marriage this year. She was a stay at home Mom when her children were growing up. She then worked at K-Mart from 1972-1976, moving to Brodhead in 1987. She loved to dance and she loved country and western music. She met Dad at a Muskego Beach dance. Dad knew he better learn to dance to win Mom over. She also loved playing the organ and playing bingo. Dad and Mom owned their own airplane and flew all over Wisconsin for pancake breakfasts. They also owned lake property on Castle Rock Lake. They spent a lot of time swimming and boating. Alma is survived by her husband, Robert, Brodhead; three children, Howard (Roz) Ross, Huntington Beach, CA, Karen (Jeffrey) Williams, Brodhead, WI, Patti (Donald) Labs, Batavia, IL; grandchildren, Sarah (Eric), Paul, John, Kyle (Fonda), Ashley (Jason), Danyelle, Mathieu, and Kristen; great-grandchildren, Ethan and Scarlett, Sawyer and Ashlynn; and a sister, Rosetta Johnson, Pewaukee, WI. She was preceded in death by her parents, in-laws, Howard and Ruth Ross, a sister-in-law, Helen Ross, a son, William Ross, a son-in-law, James Hudnall, a brother, Ben Kern and wife Dorothy, and a sister, Esther Staab and husband Oscar. Funeral services will be held at 11 a.m., Friday, October 3, 2014, at The United Methodist Church, Brodhead, with Pastor Krystal Goodger officiating. Burial will be in Greenwood Cemetery, Brodhead. Visitation will be held from 5-7:30 p.m., Thursday, at the D.L. NEWCOMER FUNERAL HOME, BRODHEAD, WI. I hope God has a red convertible up in heaven for you to drive. I also hope they have a K-Mart for you to drive to. I can see you with your top down and your visor on, a good country western song playing with a smile on your face. That�s our Mom and that is how she would want to be remembered.

On September 28, 2014 at 2:39 p.m., Mom went to heaven. At the end of her life she was strong and vulnerable; she was tired and tireless, determined and also ready to surrender to God. She did it all, she lived it all, and she loved us all.... View Obituary & Service Information

The family of Alma Adeline (Kern) Ross created this Life Tributes page to make it easy to share your memories.