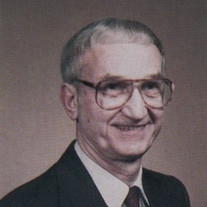 Pastor Amos Shimko, age 90, returned to God�s gracious arms on Monday, February 17, 2014, at Woods Crossing Nursing Home, Brodhead, WI, surrounded by his family. He was born on April 2, 1923 at Beaver Creek near Markleysburg, PA, the son of John and Anna (Adams) Shimko. He married Dorothy Jane Marker on July 18, 1944 in Uniontown, PA. Amos grew-up on a farm in Beaver Creek and attended an elementary, one room school. He attended German Township High School in McClellantown, PA and later graduated from Waynesburg University, Waynesburg, PA, with a Master of Arts degree in English and history. Pastor Amos had earlier worked on the farm and later hauling timber to coal mines in southwestern Pennsylvania. He also worked for a heating and plumbing business in Uniontown, PA. In 1944, he entered the U.S. Marines and served at Pearl Harbor, HI, in Guam, and also in Japan with the Occupational Forces. In early 1950, Amos felt God�s call to the pastoral ministry in the United Methodist Church. He served his first parish in Mt. Morris, PA and in 1958 he, with his wife, and their children, moved to Briggsville, WI. Amos attended the Garrett Evangelical Theological Seminary in Evanston, IL and graduated with a Master of Divinity Degree. Other parishes where Amos and Dorothy served in Wisconsin were in Madison, Mt. Horeb, Spooner, Brodhead, and Wauwatosa, from which they retired in 1988 from full-time ministry. They moved back to Brodhead, where Amos served as visitation pastor for 10 years and then continued to serve in Brodhead. Amos is survived by his wife, Dorothy; two daughters, Deanna Shimko, Waterford, WI, Dawn Shimko, Brodhead, WI; three sons, Dale Shimko, Pompano Beach, FL, Darl Shimko, Madison, WI, Devin Shimko, Janesville, WI; six grandchildren; six great-grandchildren; and many nieces and nephews. Burial will be held at the Sansom Chapel Cemetery, Farmington, PA, on Sunday, February 23, 2014. Memorial services will be held at 7 p.m., Thursday, March 6, 2014, at the United Methodist Church, Brodhead, with a visitation held from 3 p.m. until 5:30 p.m. at the church. Memorials may be made to the United Methodist Committee on Relief (UMCOR), Building Cambodia Inc - Advance #7802, or a charity of your choice.�

The family of Pastor Amos Shimko created this Life Tributes page to make it easy to share your memories.

Send flowers to the Shimko family.