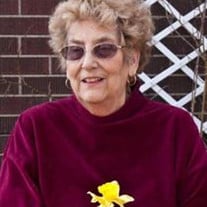 Ann L. Hammell, age 80, of Orfrordville, WI, passed away on Tuesday, March 31, 2015, at Agrace Hospice, Janesville, WI. She was born on June 30, 1934 in Magnolia Township, Rock County, Wisconsin, the daughter of Harlow and Faye (Dilree) Burtness. She married Earl A. Hammell on August 19, 1952. He passed away in 1968. Ann worked for the U.S. Postal Service as a clerk and carrier for 29 years. She served as the Orfordville Postmaster from 1985 until retiring in 1992. She had been the Sunday School Superintendent at Orfordville Lutheran Church for many years and had served on the Maple Grove Cemetery Board. She enjoyed music and playing the accordion and organ, crocheting and knitting, gardening, all animals, especially cats, and painting. Her children were her entire world. Ann�s smile was infectious and everything was always, �just peachy!� She is survived by her children, Michael (Deborah) Hammell, San Diego, CA, Jim (Charo) Hammell, Rancho Santa Margarita, CA, Alvin Hammell, Orfordville, WI, Julie Hammell, Afton, WI; a sister, Jenny (Vince) Walmer, Muscoda, WI; two grandchildren, Stephanie and Christopher Hammell; Tabatha and Carrlena Boldt, whom she considered grandchildren; and a special niece, Michelle LaRue, and many nephews. She was preceded in death by her parents, husband, and a sister, Janice LaRue. Funeral services will be held at 11 a.m., Saturday, April 4, 2015, at the Orfordville Lutheran Church, with Pastor Andy Twiton officiating. Burial will be in Maple Grove Cemetery, Orfordville. Visitation will be held from 5 p.m. until 7:30 p.m. on Friday at the D.L. NEWCOMER FUNERAL HOME, BRODHEAD, WI.

The family of Ann L. (Burtness) Hammell created this Life Tributes page to make it easy to share your memories.