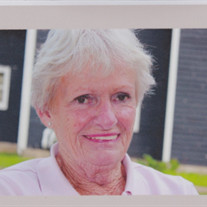 Annabelle Palka Preston, age 89, of Brodhead, passed away with all of her family present on Thursday, July 7, 2016, at the Monroe Clinic Hospital. She was born on May 3, 1927 in Brodhead, WI, the daughter of Helmer and Margaret (Johnson) Olmstead. She married John Palka on February 12, 1949 at the Congregational United Church of Christ, Brodhead. John passed away on May 24, 2001. She later married Bill Preston, who predeceased her. Ann graduated from Brodhead High School in 1945 and attended Spencerian Business School in Milwaukee. She was a member of the Congregational United Church of Christ and the American Legion Auxiliary, both of Brodhead. She had worked for a time at the Milwaukee Sentinel Newspaper. Ann then moved to Chicago and worked at the Chicago Bridge and Iron Company where she met her first husband John. They met during a golf outing the company sponsored. They married in February of 1949 in Brodhead and many of their guests arrived by train at the Brodhead Depot from Chicago and stayed at the Shorb Hotel. For many summers, she worked and played golf at the Decatur Lake Country Club, which her parents managed for approximately 23 years. Following her marriage, she lived in Chicago, Glen Ellyn, IL and Boulder Junction, WI, before moving back to Brodhead in 1984. Ann enjoyed playing poker, swimming and working out at the fitness center, happy hours and dinners out, all with a group of amazing friends. She also loved spending time at the cottage on Decatur Lake, boating and spending time with her family. She is survived by her daughters, Peggy (Ron) Phillips, Brodhead, Wendy (Jack) Schultz, Galena, IL; grandchildren, Sally (Mark) Gulden, Andrew (Anna) Jubie, Erik (Marika) Wasmund, Matt (Carrie) Wasmund, Peter (Frayah) Wasmund; and 12 beautiful great-grandchildren. She was preceded in death by her parents, husbands, and a sister, Kay Fricke Wraight. A Memorial Service will be held at 11:30 a.m., Friday, July 15, 2016, at the D.L. NEWCOMER FUNERAL HOME, BRODHEAD, WI, with Pastor David Frey officiating. Burial will be in Greenwood Cemetery, Brodhead, WI. Visitation will be held from 10 a.m. until time of services at the funeral home. In lieu of flowers, donations may be made to the Green County Humane Society or to the DLMRA (Decatur Lake Mill Race Association).

Annabelle Palka Preston, age 89, of Brodhead, passed away with all of her family present on Thursday, July 7, 2016, at the Monroe Clinic Hospital. She was born on May 3, 1927 in Brodhead, WI, the daughter of Helmer and Margaret (Johnson) Olmstead.... View Obituary & Service Information

The family of Annabelle Palka (Olmstead) Preston created this Life Tributes page to make it easy to share your memories.

Annabelle Palka Preston, age 89, of Brodhead, passed away with...