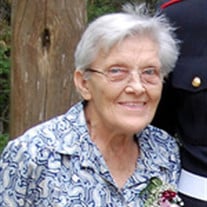 Brodhead - Arlene M. Ruchti, age 85, passed away on Saturday, January 15, 2011 at the Evansville Manor, Evansville, WI. She was born on September 10, 1925 in Brodhead, the daughter of Josiah Brian �J.B.� and Bernice (Kammerer) Searles. She married Adolph �Fritz� Ruchti on November 24, 1956 in Brodhead. He passed away on November 19, 2003. Arlene graduated from Brodhead High School in 1943, and attended Madison Business College. She was a member of the Congregational United Church of Christ, Brodhead, and had served as a past Sunday School Superintendent. She had been a Girl Scout leader, a member of the Brodhead Firefighters Auxiliary and the Eastern Star. Prior to her marriage, Arlene did bookkeeping for many area businesses, including her father�s farm implement business. After her marriage, Arlene was the bookkeeper for the family business, Ruchti Implement, a local John Deere dealership. She loved�to sew and socialize with friends and customers, but most of all, she cherished the time she was able to spend with her grandchildren. She is survived by her children, Walter (Cheryl) Ruchti, Post Falls, ID, John (Jayne) Ruchti, Merry (Bill �Bear�) Lawrence, both of Evansville, Bill (Carrie Shelton) Ruchti, Brodhead, Jean Ruchti, Stoughton, Thomas Ruchti, Janesville, a sister-in-law, Katherine �Kay� Searles, Brodhead, former daughter-in-law, Teresa Ruchti, Beloit, and thirteen grandchildren. She was preceded in death by her husband and two brothers, J.B. and Robert Searles. Memorial services will be held at 11:00 a.m., Friday, January 21, 2011, at the Congregational United Church of Christ, Brodhead, with Rev. R. Tiffany Bates officiating. Visitation will be held from 10:00 a.m. until time of services at the church. The family would like to express their heartfelt thanks to the staff at the UW Dialysis Center in Fitchburg and the staff and residents at the Evansville Manor for making Arlene's time with them so enjoyable.

The family of Arlene M. Ruchti created this Life Tributes page to make it easy to share your memories.

Send flowers to the Ruchti family.