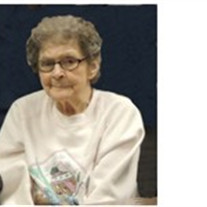 Bertha E. Kopplin, age 90, of Janesville, formerly of Beloit, went to be with the Lord on Monday, July 22, 2013, at St. Elizabeth�s Nursing Home, Janesville. She was born on December 28, 1922 in Spring Grove Township, Green County, WI, the daughter of Earl and Lena (Zweifel) Cleaveland. She was married to Chester Lewis and after they parted, she married William Kopplin. Bertha lived in Beloit for 45 years before moving to Janesville. She retired from Freeman Shoe of Beloit, was a nanny, and loved babysitting animals. She was an active member of the Order of the Moose in Beloit for many years. She is survived by two daughters, Beverly (Darrell Pelekan) Woodstock, Janesville, WI, Donna (Stephen) Appleman, Oconto Falls, WI; a sister, Anna Miller, Albany, WI; a brother, Robert (Darlene) Cleaveland, Freeport, IL; a grandson, Daniel Kundert; three great-grandchildren, Christian, Daniel and Naomi; her beloved cat, Missy; and several nieces and nephews. She was preceded in death by her parents, husband, and three brothers, Elmer, Lee, and Charles. Funeral services will be held at 11:30 a.m., Friday, July 26, 2013, at the D.L. NEWCOMER FUNERAL HOME, BRODHEAD, with Wendee Nitz officiating. Burial will be in Greenwood Cemetery, Brodhead. Visitation will be held from 10 a.m. until time of services at the funeral home on Friday. A memorial fund will be established. The family would like to thank the staff at St. Elizabeth�s and Agrace Hospice.

The family of Bertha Earlena (Cleaveland) Kopplin created this Life Tributes page to make it easy to share your memories.