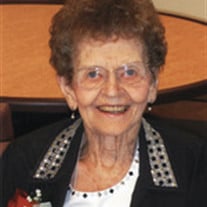 Beth (Betty) Irene McNitt-Ringen, age 90, passed away on Friday, May 14, 2010 at St. Clare Friedensheim in Monroe, WI. She was born in Avon Township on July 8, 1919, the daughter of Clayton and Nettie (Henry) McNitt. She graduated from Brodhead High School in 1936 and Beloit Vocational School in 1938. She married Lowell Ringen on June 16, 1940. He preceded her in death on February 10, 1993. Beth was the first secretary and office manager in the Brodhead School District, working under the late C.T. Pfisterer, Supt. Of Schools in 1938. After taking a few years off to raise two children, she returned to the Brodhead School System in 1950 working there a total of 36 � years. Beth was a member of the Bethlehem Lutheran Church, Brodhead. She taught Sunday School, sang in the choir, and served as financial secretary. She also did her husband�s bookwork for seventeen years in his business. She enjoyed reading, counted cross-stitch, knitting, ceramics, golfing, card club, family and friends. Beth is survived by one son, Gary (Jill) Ringen, of Darlington, WI, grandchildren, Shelley (David) Hull, Red Wing, MN, Scott (Holly) Ringen, Madison, WI, Matthew Ford, Madison, WI, Jonathan (Selene) Ford, LaPaz, BCS, Mexico, and Timothy (Judy) Ford, Madison. Beth was very proud of her great-grandchildren, Kaia Jackson and Aidan Hull, Solomon, Alana and Isaac Ringen, and Alyssa Ford. She is also survived by a God Child, Diane (Neal) Hoppe, Platteville, WI, and many �special friends.� Beth was preceded in death by her parents, husband, daughter, Cheryl Ringen Paulson, two sisters, Leila Haack and Mary Schilling, two brothers-in-law, Donald Haack and Duane Schilling, and a son-in-law, Richard Paulson. Funeral services will be held at 1:00 p.m., Wednesday, May 19, 2010, at Bethlehem Lutheran Church, Brodhead, WI, with Pastor Kenneth Schaub officiating. Burial will be in Greenwood Cemetery, Brodhead. Visitation will be held on Wednesday from 11:00 a.m. until 1:00 p.m., at the church. A memorial fund will be established. The D.L. NEWCOMER FUNERAL HOME, BRODHEAD, WI, is assisting the family. The family would like to extend a heartfelt thanks to all of the staff at St. Clare Friedensheim, Monroe, WI, and the Flesher Family (Joni, Jack, Abby, and Alexis).

Beth (Betty) Irene McNitt-Ringen, age 90, passed away on Friday, May 14, 2010 at St. Clare Friedensheim in Monroe, WI. She was born in Avon Township on July 8, 1919, the daughter of Clayton and Nettie (Henry) McNitt. She graduated from Brodhead... View Obituary & Service Information

The family of Beth (Betty) Irene (McNitt) Ringen created this Life Tributes page to make it easy to share your memories.