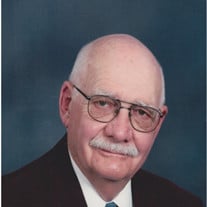 Obituary      Bruce William Timm, age 86, passed away unexpectedly on Tuesday, April 17, 2018, at Mercy Hospital, Janesville.  Bruce was born in Brodhead on April 22, 1931, the son of John Christ “Jack” and Mabel (Heath) Timm. Bruce married Helen Stettler in Brodhead on August 29, 1954.  They were married for 57 years until Helen's death in 2011.        On the day Bruce was born, the Clarence Covered Bridge fell down.  Spectators exclaiming about the tragedy of the bridge collapse also noted, “and poor Mabel Timm just had her third boy.”  Bruce graduated from Brodhead High School in 1948 and attended Beloit College.  He served in the U.S. Army and was part of the occupation Forces Post – WWII, stationed in Salsburg, Austria.  After being honorably discharged in 1953, he returned to Brodhead and joined the family business, Timm Motor Company, with his father and brothers, Donald and John D.  He continued working at Timm Motor Co. until his retirement. Bruce was a lifelong resident of Brodhead and was very invested in the community.  He was a charter member of the Jaycees, a member of the American Legion Post 197, a  32nd Degree Mason, a two term mayor, and was instrumental in the development of the Sugar River Trail as President of the Board.  Bruce was appointed as director of the Green County Bank to fill the vacancy created by his father's death.  At the time, he was the youngest director appointed.  Eventually, he became the Chairman of the Board.  Bruce and his wife Helen wintered in Gulf Shores, AL for many years.      Bruce is survived by his three children: Philip, Janesville, Nancy(Brian)Farrell, Rockwall, TX, and David (Diane), Green Bay; grandchildren, Patrick (Kayci) Timm, Katherine (Nate) Newmeister, Christopher (Annie) Farrell, Paige, Michael and Jacob Timm, Madeline and Claire Timm; great-grandson, Rowen Timm; step-grandchildren: Megan (Brady) Schultz, Chris (Ariel) Offerdahl; step great-grandchildren, Sophie and Owen Schultz,; AFS daughter, Lena Kougiamis and foster daughter, Jolly Lamb.   He was preceded in death by his parents, wife, brothers, Donald, John D. and grandson Jonathan Timm.      Funeral services will be held at 11:30 a.m., Monday, April 23, 2018, at the D.L. Newcomer Funeral Home, Brodhead, WI with Rev. Krystal Goodger officiating.  Burial will be in Greenwood Cemetery, Brodhead, WI, with military rites.  Visitation will be held from 10 a.m. on Monday until time of services at the funeral home.  A special thank you to Beverly and Clyde Curtis and Dr. Kevin Bluemel. To send flowers to the family or plant a tree in memory of Bruce William Timm, please visit our floral store.

The family of Bruce William Timm created this Life Tributes page to make it easy to share your memories.