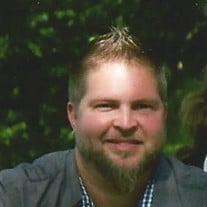 Orangeville - Chad Robert Martin, age 34, passed away unexpectedly in Freeport on March 15, 2017. Chad was born on July 12, 1982 in Freeport, the son of Bob and Tina (MacKenzie) Martin. Chad married April Eiseman on October 23, 2004 in Elizabeth, IL. Chad worked for over 5 years at Woodward in Rockford in the metal plating department. Chad was an avid Dallas Cowboys fan and Chicago Cubs fan. Chad enjoyed playing softball as well as coaching his daughters in softball and basketball, going golfing and always looked forward to playing in the annual Orangeville Alumni Football game. Chad was also a member of the Eastgate Christian Center in Freeport. Chad is survived by his wife, April; two daughters, Mersadez and Kamrynn; his parents, Bob (Tina) Martin; two sisters, Tania (Jarod) Williams and Erika (Shawn) Johnson; maternal grandfather, Ronald MacKenzie; paternal grandfather, Gene Knoll; mother-in-law, Kerri (Scott) Gerke and father-in-law, Duane Eiseman. Chad is also survived by several aunts, uncles, nieces, nephews and many other relatives. Chad was preceded in death by his maternal grandmother, Barb MacKenzie and his paternal grandmother, Bernice Knoll. In lieu of flowers, memorials can be directed to the family. Per Chad's wishes, we ask that everyone that attends the visitation or funeral service to be dressed in your favorite sports team attire. A visitation will be held at the Eastgate Christian Center, 1650 South Armstrong Avenue, Freeport IL on Sunday, March 19, 2017 from 3:00 to 6:00 PM. Funeral services will also be held at the church on Monday, March 20, 2017 at 11:00 AM with a visitation from 10:00 AM until the time of service. Burial will conclude at the Afolkey United Methodist Church.

The family of Chad Robert Martin created this Life Tributes page to make it easy to share your memories.

Send flowers to the Martin family.