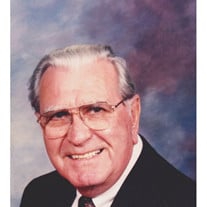 Obituary      Charles Edward McManus, of Evansville, WI, formerly of Brodhead, passed away on Tuesday,  April 17, 2018, at The Heights Assisted Living, Evansville, WI.  He was born on February 9, 1926 in Sesser, IL, the son of Philip and Gertrude (Davis) McManus.        During World War II, Charles enlisted in the Marines and served in the Pacific Theatre, including the Liberation of the Philippines. After the war he studied political science and educational psychology at Southern Illinois University in Carbondale, and there he met Nora Kreher, whom he married in 1949. After graduating from SIU he began his career in coal and later oil and gasoline sales, a career that took him and his family from Illinois, to Iowa, Missouri, California, and finally Wisconsin. In 1966 he bought Ties Oil Company, later named McManus Oil Company, in Brodhead, which he and Nora owned and operated until their retirement in 1992. Charles was a leader and innovator in the oil and heating business, served as President of the Wisconsin Oil Jobbers Association, and was one of the first dealers in the nation to offer customers 24-hour, self-service gasoline through a card-swipe operation. Charles was active in the Republican Party and served as a Wisconsin Delegate at the party’s national convention in Kansas City in 1976. He was a member of the Swann-Gehr American Legion Post #197, served as Commander of the post three times, and was a member of St. Rose of Lima Catholic Church of Brodhead. In retirement he and Nora traveled and then enjoyed the quiet life at home where they took pleasure in watching birds, squirrels and all forms of wildlife.       Survivors include his wife Nora; son Philip (Sandra) McManus of Fallon, NV; daughters Kathleen (James) Klein of Edgerton; Carolyn (Timothy) Tiller of Blue River; Mary (Scott) Laube of Brodhead; and Patricia (Murray Clayton) McManus of Middleton; and numerous grandchildren and great-grandchildren.      A Mass of Christian Burial will be held on Tuesday, April 24, at 10:30 a.m., at St, Rose of Lima Catholic Church, Brodhead, WI, with Father Kevin Dooley presiding.  Visitation will be held on Tuesday from  9:30 a.m. until time of services at the church.  Burial will be in Greenwood Cemetery, Brodhead, WI, with military rites.  In lieu of flowers, donations can be made to the OATH Foundation, a non-profit that provides outdoors adventures for veterans (www.theoathfoundation.net) or to The Heights Assisted Living, Evansville. The family would like to express their deep appreciation to Shelly and the entire staff at the Heights Assisted Living in Evansville for their friendship and care over the past few years. To send flowers to the family or plant a tree in memory of Charles Edward McManus, please visit our floral store.

Obituary      Charles Edward McManus, of Evansville, WI, formerly of Brodhead, passed away on Tuesday,  April 17, 2018, at The Heights Assisted Living, Evansville, WI.  He was born on February 9, 1926 in Sesser, IL, the son of Philip and Gertrude (Davis)... View Obituary & Service Information

The family of Charles Edward McManus created this Life Tributes page to make it easy to share your memories.

Send flowers to the McManus family.