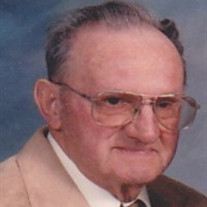 Charles E. Sutherland, age 97, of Brodhead, passed away on Friday, October 4, 2013 at Collinwood Elderly Care Home, Brodhead. He was born on November 12, 1915 in Bainville, MT, the son of Joseph and Mabel Sutherland. He married Doris M. Bush on January 14, 1940 in Pepin, WI. Charles had farmed and also worked for Beloit Corp., City of Brodhead, Brodhead Water and Light, was a school bus driver, and after his retirement, had a lawn care maintenance business. He was a member of the Congregational United Church of Christ, Brodhead. He and his wife loved traveling the United States. He is survived by his wife, Doris, Brodhead; children, Bruce (Shirley) Sutherland, Gary (Nancy) Sutherland, Wendy (Randy) Schupbach, all of Brodhead; two brothers, Harvey Sutherland, La Sueur, MN, Albert Sutherland, Spokane, WA; a sister, Dorothy Martin, River Falls, WI, seven grandchildren and ten great-grandchildren. He was preceded in death by his parents, two sisters, and six brothers. Funeral services will be held at 11a.m., Tuesday, October 8, 2013, at the Congregational United Church of Christ, Brodhead, with Pastor Marlea Gilbert officiating. Burial will be in Greenwood Cemetery, Brodhead. Visitation will be from 10 a.m. until time of services at the church.�

The family of Charles Edward Sutherland created this Life Tributes page to make it easy to share your memories.

Charles E. Sutherland, age 97, of Brodhead, passed away on Friday,...

Send flowers to the Sutherland family.