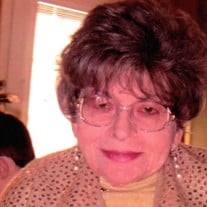 Constance �Connie� Marie Eron, the oldest of three daughters, was born in Memphis, TN on June 12, 1935 to Edwin and Agatha (Bonneprise) Eron. She attended schools in Illinois, Oklahoma City, Milwaukee and graduated from St. Croix Falls, WI High School in 1953. She married Ernest I. Hendrix. They were parents to Anne Marie. She later married Edgar Ballou. He adopted Anne and together they had three children; Edgar Francis, Mary Catherine and Kevin James. Afterwards, she married Ralph E. Pash from Wichita Falls, TX. Following his retirement from the Navy, they made their home in Wichita Falls and Burkburnett, TX, until Connie's going home on March 16, 2016. Connie had a God-given talent as a seamstress. She made wedding gowns, veils, formal gowns and all manner of clothing, even costumes, home d�cor and curtains. Her home decorating ability was unsurpassed. It was while living in Texas that Connie made known her belief and trust in the Lord Jesus Christ. She frequently expressed praise and thanksgiving for His watchcare over her. She loved the old gospel songs and Bible preaching. Survivors include her husband Ralph, daughter Ann Escalera; sons Edgar and Kevin Ballou; her grandchildren; (Anne's daughters) Mary McCue and Mary's two sons, Lisa (Gilbert) Nino and their son and daughter, Kani and her daughter, Kevin's daughter and son, Nicole and Tyler Ballou. Connie is also survived by her sister and brother-in-law, Catherine and Jim Moseley of Monroe, WI, her former husband Ed Ballou of Janesville, WI, and many nieces, nephews and friends. She was pre-deceased by her daughter Mary Catherine Ballou, her parents, Edwin and Agatha Eron, her sister and brother-in-law, Janet and Sam Angelo, Ralph's parents, Paul and Nellie Pash, and her �little� Grandma Bonneprise. Funeral services will be held at 2 p.m., Wednesday, March 23, 2016, at the D.L. NEWCOMER FUNERAL HOME, BRODHEAD, WI. Connie's earthly resting place will be in Greenwood Cemetery, Brodhead, WI. We love you and we will miss you Connie!

The family of Constance "Connie" Marie (Eron) Pash created this Life Tributes page to make it easy to share your memories.