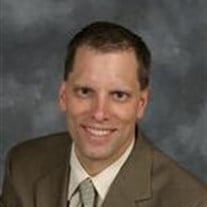 Albany - David L. Bump, age 43, of Albany, passed away unexpectedly at his home on Sunday, May 20, 2012. He was born on June 29, 1968, the son of Robert and Priscilla (Hogan) Bump. David was a 1986 graduate of Albany High School, a member of Bethlehem Lutheran Church, Brodhead, and a realtor with Keller-Williams, Madison, WI. David was an avid Packer fan and attended many games at Lambeau Field. He loved to play football and baseball with his children in his front yard. He always made sure to attend all of his children�s school activities and sporting events and was their #1 fan! He is survived by his beautiful children: Paige Morgan, Faith Anna Marie, and Ethan Lee Bump; parents: Robert and Priscilla Bump, Albany; a sister: Amy Jo (David) Esser, Madison; a niece: Amber Esser, Minneapolis, MN; a brother: Randall (Dena) Bump, Albany; a nephew: T. J. Bump and nieces Sydney and Cassidy Bump, Albany; and the mother of his children: Patty, New Glarus. He was preceded in death by his grandparents, Dwight and Leona Bump, Ann Newcomer, and his uncle, Jerry Hogan. Funeral services will be held at 11 a.m., Thursday, May 24, 2012, at the Bethlehem Lutheran Church, Brodhead, with Rev. Peder Johanson officiating. Burial will be in Hillcrest Cemetery, Albany. Visitation will be held on Wednesday, May 23, 2012, from 4 p.m. until 8 p.m. at the D.L. NEWCOMER FUNERAL HOME, BRODHEAD, and from 10 a.m. on Thursday until time of services at the church. In lieu of flowers, memorials may be made to the David Lee Bump Trust. David will be greatly missed by his children, family members, and many friends.

The family of David L. Bump created this Life Tributes page to make it easy to share your memories.

Send flowers to the Bump family.