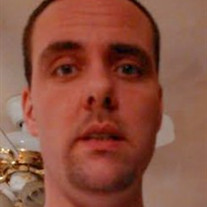 David G. Pope, age 36, of Brodhead, passed away on Wednesday, April 1st, 2015, at the U.W. Hospital and Clinics, Madison, WI. He was born on January 12, 1979 in Libertyville, IL, the son of George N. and Donna L. (Wright) Pope. David graduated from Christian County High School, Hopkinsville, KY and had worked for Belgioioso Cheese Co., Denmark, WI and also Stoughton Trailor, Brodhead, WI. He enjoyed building computers, playing MMO, his truck, camping, dogs, and being with his nieces. He also was an accomplished artist with his drawings. He is survived by his parents; a brother, Timothy Pope; a sister, Jennifer Pope; two nieces, Melody and Heaven Pope, all of Brodhead; and his maternal grandmother, Leona Wright, Southern Illinois. He was preceded in death by his maternal grandfather, Melvin Wright and paternal grandparents, Nicholas and Hilda Pope. A Memorial Service will be held at 6 p.m., Saturday, April 4th, 2015, at the D.L. NEWCOMER FUNERAL HOME, BRODHEAD, WI, with visitation commencing at 4 p.m. until time of services.�

The family of David G. Pope created this Life Tributes page to make it easy to share your memories.

Send flowers to the Pope family.