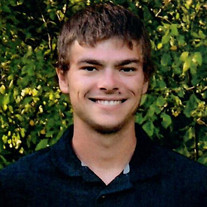 Obituary Brodhead - Devin Quade Manley, age 23, of Brodhead, Wisconsin passed away on May 30, 2020 from injuries sustained in a motorcycle accident. Devin was born on November 5, 1996 in Janesville, Wisconsin to Michael and Tamara (Fuchs) Manley. Devin attended Brodhead schools until his junior year. He graduated from McFarland High School in 2015 with high honors. Growing up Devin was active in baseball, football, and wrestling. Devin was gifted with amazing agility, which led to riding a bike without training wheels at 2 years old. He graduated quickly to a motorcycle at the age of 4. He wasn’t afraid to try anything. He was a talented skateboarder and could be seen skating on his half pipe to entertain his brother Austin. During his early childhood, Devin spent everyday doing all he could to see his big brother smile. When his twin sisters Jillian and Jocelyn came along, he learned how to be a big brother and protector. During his childhood, Devin could be seen surrounded by friends; biking the town, swimming at the pool, and shooting hoops at the courts. There was never a dull moment in Devin’s life. As a teenager, Devin had a passion for gaming on Xbox. He had friends far and wide he would game with, including his dad. As Devin grew up, so did his passion for cars, trucks, and motorcycles. His first baby was his orange Honda Civic Si. He spent hours modifying and upgrading his ride. Devin was employed as an asphalt roller operator with Bartelt Enterprise. He had studied hard to obtain his CDL permit and was looking forward to driving truck. Devin previously held positions in landscaping, concrete and sealcoating. Devin’s meaning of hard work and love transformed with the birth of his daughter Delilah “Woogie”. He was forever changed and made a commitment to strive to be the best father and provider for his children. He was ecstatic to learn of his son Jaxton’s arrival in July 2020. Devin’s outgoing nature made it easy for him to make his way in this world. He enjoyed coffee runs while cruising and listening to music with his sisters. Always lending a helping hand or jumping in to offer kind words and support to others. Devin will be remembered for his infectious smile, courageous heart, and one day at a time attitude. Devin is survived by his (Fiancé) Alexis Picard, their children Delilah and Jaxton. His parents, sisters; Jocelyn(Dakota Naramore), Jillian and Bentlei Manley. Paternal grandmother Janette Coggins, Maternal grandparents Ronald(Jolene) Fuchs, Mary(John) Ubert. Many aunts, uncles and cousins. He is further survived by his 2nd Mom/Auntie Crystal(Aaron) Goecks-Zuehlke and his cousin that stepped in as a big brother, Austin Ferguson. Many friends and coworkers that impacted him and helped to mold and guide him daily. Devin was reunited at his death with his big brother and hero Austin “Buddy” Manley. Paternal grandfather, Mark Manley and Uncle, Christopher Goecks. Special thank you to the police, fire, EMS, Medflight and bystanders that valiantly worked with everything they had to try and save Devin’s life. This was a tragic accident and will serve as a reminder to watch for motorcycles on the road. Never miss an opportunity to tell those in your life how much you love them. Your children will know you as an amazing father through the memories you created during your short time here on earth. In lieu of flowers, memorials can be directed to his family in his memory. A public visitation will be held at the DL Newcomer Funeral Home, 1105 E. 9th Avenue in Brodhead on Friday, June 5, 2020 from 2:00 PM to 7:00 PM.  Due to COVID restrictions, all visitors will be required to wear a mask upon entry and visitors will be staggered for entrance into the building during that time. Family will ask visitors to be patient during their outside wait prior to entry.   A private family service will be held at the funeral home on Saturday with burial to conclude at the Greenwood Cemetery in Brodhead. www.dlnewcomerfuneralhome.com    608-897-2484 To send flowers to the family or plant a tree in memory of Devin Quade Manley, please visit our floral store.

Obituary Brodhead - Devin Quade Manley, age 23, of Brodhead, Wisconsin passed away on May 30, 2020 from injuries sustained in a motorcycle accident. Devin was born on November 5, 1996 in Janesville, Wisconsin to Michael and Tamara (Fuchs) Manley.... View Obituary & Service Information

The family of Devin Quade Manley created this Life Tributes page to make it easy to share your memories.

Send flowers to the Manley family.