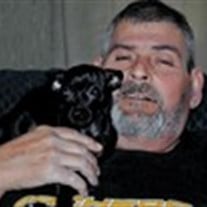 Donald D. �Brother� Williams, age 60, of Brodhead, passed away on Monday, May 7, 2012, at his home. He was born on November 2, 1951 in Kirksville, MO, the son of Bernard and Ethel (Singleton) Williams. Don married Debra S. Kirichkow on May 22, 1976 in Rockton, IL. Donald was a welder for many places during his career. These included Knight Mfg in Brodhead, Fairbanks Morse in Beloit, Fabco Caterpillar in Madison and Wright Bros. in Charleston, TN. He was a member of the NRA, loved riding motorcycles, hunting, fishing, and spending time at the casinos. He was also a faithful Packer fan and had a passion for cooking. He is survived by his three children: Lisa Anderson, Jessica (Lucas) Robl and Marcia Williams, all of Brodhead; four grandchildren, Danielle, Jordan, Jeffery and Tyler; his siblings, Betty (Leonard) Kotwitz, Millie (Dan) Riley, Mary Spears, Jolene �Sissy� Williams, Joe (Frances) Williams, Eddie (Arlene) Williams, and Glen Dale Williams; and the mother of his children, Debra Williams of Brodhead. He was preceded in death by his parents, three brothers, Eugene in infancy, Arthur �Sonny�, and Harold Duane �Teeny� Williams. Funeral services will be held at 11:00 a.m., Friday, May 11, 2012, at the D.L. NEWCOMER FUNERAL HOME, BRODHEAD, with Lucas Robl officiating. Burial will be in Greenwood Cemetery, Brodhead. Visitation will be held on Thursday from 5:00 p.m. until 8:00 p.m. at the funeral home.�

The family of Donald D. "Brother" Williams created this Life Tributes page to make it easy to share your memories.