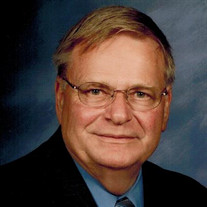 Albany - Donald W. Bucholtz, age 77, was taken from his earthly home to his heavenly home on August 21, 2021. Don was born on December 25, 1943 to Walter and Harriet Bucholtz in Kewaunee, Wisconsin. Don attended Alaska Grade School in Alaska, Wisconsin and graduated from Algoma High School in Algoma, Wisconsin. After graduation he enlisted in the U.S. Navy and was trained in Electronics Technology. After he was honorably discharged, Don married Jean Fager on September 9, 1967. They were blessed with two children and 54 years of marriage. Don used his electronics training to get a job in the Astronomy Department at the University of Wisconsin-Madison where he was employed for over 30 years. While at the University, he worked on a number of projects including working for NASA on an experimental telescope that flew onboard the Space Shuttle in 1990 and again in 1995. Don had a life-long love of learning new things. He obtained his private pilot's license, real estate license and amateur radio license among having a number of other hobbies. He could look at almost any mechanical or structural problem and figure out what was wrong and then proceed to fix the problem. His retirement years were spent working part-time at Rock Creek Barrel in Albany, hunting, going to gun shows and enjoying quiet time with Jean at their home in the woods north of Albany, Wisconsin. During the latter portion of his retirement years he spent countless hours enjoying target shooting regularly participating in competitive shooting with targets up to 1000 yards. Even more important than those activities was his family which was his greatest source of pride and joy. He also knew the importance of having faith in God. Don and Jean were members of Our Redeemer and Eastside Lutheran Churches in Madison and are currently members of St. Peter's Lutheran Church in Brodhead. Don was a loving husband, father and grandfather. He was a good neighbor and friend. He was always ready to strike up a conversation with a friend or stranger and lend help to those in need. Don is survived by his wife, Jean (Fager) Bucholtz; his daughter, Barb (Rory) Meyer of Deerfield, Wisconsin; his son, Brian Bucholtz of Monroe, Wisconsin; two granddaughters, Lindsay (Kyler) Huisman of Rock Rapids, Iowa and Jenna Meyer (Robbie Smith) of Marshall, Minnesota; a sister-in-law, Grace Obry; a brother-in-law, Dave (Karen) Fager and many nieces and nephews and other relatives. Don was preceded in death by his parents, Walter and Harriet (Sinkula) Bucholtz; his father-in-law and mother-in-law, Milton and Mae (Roggenbau) Fager; a brother, Dean Bucholtz, and two sisters, Donna Futrell and Sally Steward. We extend a big thankyou to Pastor Swiderski and all the friends at church that extended words of comfort, prayers and help. The family extends another thank-you to Agrace Hospice Care and D.L. Newcomer Funeral Home for all their help. In lieu of flowers, memorials may be made to the LUNGevity Foundation or St. Peter’s Lutheran Church. A memorial service will be held at the St. Peter’s Lutheran Church, 1708 6th Avenue West in Brodhead WI on Thursday, September 2, 2021 at 12:00 PM. A visitation will also take place at the church prior from 10:00 AM until the time of services. Military honors will take place immediately following the services at the church. The DL Newcomer Funeral Home in Brodhead is assisting the family. www.dlnewcomerfuneralhome.com 608-897-2484

The family of Donald Wayne Bucholtz created this Life Tributes page to make it easy to share your memories.

Send flowers to the Bucholtz family.