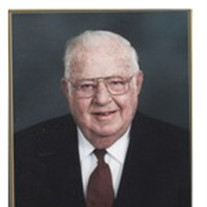 Brodhead - Donald M. Condon Sr., age 89, of Brodhead, passed away on Friday, November 18, 2011, at Pleasant View Nursing Home, Monroe. He was born on August 14, 1922 in Brodhead, the son of Marion J. and Phebe (Cortelyou) Condon. He married Betty May Jones on September 2, 1944 in Portland, ME. Don graduated from Brodhead High School in 1940. He attended UW-Madison�s school of business. During World War II, Don served as 2nd Lieutenant in the U.S. Navy and was a dispersing officer on a destroyer tender. Following serving his country, he continued his education and graduated from the UW-Madison in 1947. He returned to Brodhead and was in the livestock business with his father for 20 years. Don was past president of the Bank of Brodhead and was on the bank�s Board of Directors for 40 years. He was a devoted member of United Methodist Church, serving on the church board, the Board of Education, the Historical Society, the Library Board, the Fire Department for 20 years, the Planning Commission, co-chairman of the Centennial Committee, the Becknell Masonic Lodge, the Order of Eastern Star, the Decatur Lake Country Club, the Lions Club, the American Legion, all of Brodhead, and the Green County Board. Don also was an avid Wisconsin Badger fan. He is survived by his wife Betty, Brodhead; two sons, Donald (Linda) Condon, Houston, TX, Jon (Susan) Condon, Beloit, WI; a brother, George (Mary) Condon, Tiverton, RI; two sisters, Margaret Christopherson, Monroe, WI, Mary Joyce (Paul) Kuenning, Milwaukee, WI; five grandchildren, Kelly Condon, Nicole (Chad) Williamson, Travis (Amber) Condon, Douglas (Elsa Arnold) Condon and Bryan (Rachell) Condon. He was preceded in death by his parents, a brother, Gerald Condon, and a sister, Daisy Lu Maslach. Funeral services will be held at 11:00 a.m., Tuesday, November 22, 2011, at the United Methodist Church, Brodhead, with Rev. Ellis �Hap� Itson officiating. Burial will be in Greenwood Cemetery, Brodhead, with military rites. Visitation will be held on Monday from 4:00 p.m. until 7:00 p.m. at the D.L. NEWCOMER FUNERAL HOME, BRODHEAD.�

The family of Donald M. Condon Sr. created this Life Tributes page to make it easy to share your memories.

Send flowers to the Condon family.