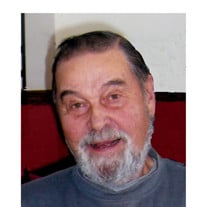 Donald A. Nelson, age 86, of Brodhead, WI, passed away on Sunday, February 5, 2017, at Brookdale Assisted Living in Brookfield. He was born on March 27, 1930 in Elkhorn, WI, the son of Herbert and Eva (Rummel) Nelson. His first marriage was to Rose Marie Friemoth in 1951. He later married Sandra Hanzel of Eagle, WI in 1990. Don graduated from Whitewater High School and joined the U.S. Navy, serving on the USS Valley Forge. He came home to farm in Little Prairie, WI, where he served on the school board until they merged with the East Troy District. He also was a member of the East Troy Lions Club and had also served on the Board of Directors of the East Troy Co-op. Don's first love was barbershop harmony. He sang with a quartet called 'The Agriculturists' winning the Land O� Lakes District championship in 1952 and competing in 3 international contests. He also sang with the Janesville Barbershop Harmony Chorus when they won the international chorus contest in 1955. Don moved to the Marshfield area in 1990 and farmed there for 9 years. It was at that time he married Sandy. They moved to Brodhead in 1999 and continued to farm. Don also continued singing with the Green County Barbershop Chorus for 8 years. Don had farmed his entire life and loved to plant corn, pour cement, and build farm buildings. He said his calling was to produce food for other people. Don is survived by his wife, Sandy; four children, Kathleen (Rick) Vultaggio, AR, Ben(Cindey) Nelson, East Troy, WI, Oley (Susan) Nelson, Hayword, WI, Kathryn (Steve) Mell, Waunakee, WI; two step-children, Linda (Rodney) Kloss, Waukesha, WI, Daniel (Jennifer) Hanzel, Crown Point, IN; 13 grandchildren, 7 step-grandchildren and 30 great-grandchildren. He was preceded in death by his parents and two brothers, Wayne and George. Funeral services will be held at noon on Thursday, February 9, 2017, at the D.L. NEWCOMER FUNERAL HOME, BRODHEAD, WI, with Cal Schaver officiating. Burial will be in Milton Lawns Memorial Park and Mausoleum, Janesville, WI. Visitation will be held from 10:30 a.m. until time of services on Thursday at the funeral home. In lieu of flowers, a memorial fund will be established. Don said his cause of death would be either a stroke, a heart attack, complications of old age, bonkus of the conkus, jealous husband - take your pick!

Donald A. Nelson, age 86, of Brodhead, WI, passed away on Sunday, February 5, 2017, at Brookdale Assisted Living in Brookfield. He was born on March 27, 1930 in Elkhorn, WI, the son of Herbert and Eva (Rummel) Nelson. His first marriage was... View Obituary & Service Information

The family of Donald Alfred Nelson created this Life Tributes page to make it easy to share your memories.

Send flowers to the Nelson family.