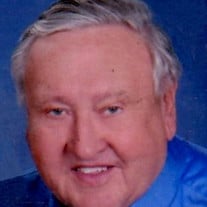 Donald B. Olin, age 73, of Brodhead, passed away peacefully at his home on Monday, May 4, 2015. He was born on March 13, 1942 in Monroe, WI, the son of Ross and Thelma (Blackford) Olin. He married Brenda Strickland on July 15, 1967 in Rocky Mount, NC. Don graduated from Brodhead High School in 1960 and UW-Whitewater in 1964. He worked as a sales and service representative for Gardner Machine Co., South Beloit, IL from 1965 until 1973. He returned to Brodhead in 1973 and together with his father they formed Olin Oil Co., Inc. on July 1, 1976. Don was always pleased with the fact that he had been a part of the only single branded (Mobil) oil company in Green County that provided continuous service for 71 years. Don proudly grew the business to include 5 convenience stores. The first was Albany in 1984, followed by Footville in 1988, Juda in 1992, Brooklyn in 1996, Monroe in 2007 and completed a lifelong wish of a home town store with Brodhead�s Trackside Mobil in 2013. His daughter Kristin has taken over the day to day operations of the business. Without the support of Rick Gretebeck and the Bank of Brodhead many of these achievements would not have been possible. Don loved to stay busy and was active in Wisconsin Petroleum Marketers, serving on several committees and as a director for two terms. He always wanted to be a part of the communities the stores were in and participated in the Brodhead Jaycees, Chamber of Commerce, Brodhead Foundation and the Congregational United Church of Christ. His efforts were greatly rewarded when he received the Melvin Jones Award (the highest award given by the Lions Club) from the Albany Lions Club. He is survived by his wife Brenda of 47 years; two daughters, Kristin (Carlos) Olmedo, Brodhead, Dr. Lori (Randy) Rockwell, Whitewater, WI; two grandchildren, Roberto and Vanessa Olmedo; his AFS brother, Dr. Julio (Marissa) Rodriguez and family, Brodhead. Don and Julio spent many hours fishing together in Wisconsin and Canada. He also is survived by an aunt, Irene Blackford, brother-in-law, Joe (Judy) Strickland, and many cousins: Bill (Mary Ann) Blackford, Ron (Joanne) Blackford, Carol Condon, Cliff (Susan) Anderson, Dennis (Lani) Tierney, Nancy Tierney, Terry Tierney, Mary (Pudge) Kramer, Robert (Lavonne) Olin, Richard Olin, and Russell (RexAnn) Olin. He was preceded in death by his parents. Visitation will be held on Friday, May 8, 2015, from 4 p.m. until 8 p.m., at the Congregational United Church of Christ, Brodhead. Memorial services will be held at 11 a.m., Saturday, May 9, 2015, at the church with a luncheon to follow. Rev. David Frey will officiate. Private family burial will be held at Greenwood Cemetery, Brodhead, immediately following the service. In lieu of flowers, gift can be made to the Brodhead Area Foundation or the Congregational United Church of Christ. Don has always been appreciative of the many services provided to him by the UW-Heart Failure Clinic and Mercy Clinic in Brodhead. The entire family is grateful for Dr. Johnson, Dr Kevin Bluemel and the entire heart-failure team with a special thanks to Bethany, Joan, and Laura, for their continued support. �They kept me going for numerous years.� and have become a part of our family. �Brodhead has been good to us�

The family of Donald B. Olin created this Life Tributes page to make it easy to share your memories.

Donald B. Olin, age 73, of Brodhead, passed away peacefully at...

Send flowers to the Olin family.