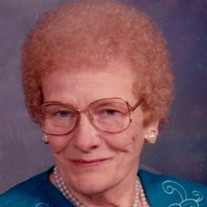 Doris M. Sutherland, age 95, of Albany, formerly of Brodhead, passed away on Tuesday, August 25th, 2015, at Valley Park Assisted Living, Albany, WI. She was born on April 1, 1920 in Stockholm, WI, the daughter of Peter and Ella (Olson) Bush. She married Charles E. Sutherland on January 14th, 1940 in Pepin, WI. He passed away on October 4th, 2013. Doris and her husband lived in the Stockholm and Pepin area for many years, moving to Orfordville in 1956 and then to Brodhead in 1958. She was the proud mother of two sons, Bruce (Shirley) Sutherland, Gary (Nancy) Sutherland; a daughter, Wendy (Randy) Schupbach, all of Brodhead; and even prouder grandmother of her seven grandchildren who were, in her eyes, �the most beautiful and perfect of all children.� They include Gregg Sutherland, Sheryl Johnson, Anita Van Dyke, Brent Sutherland, Carmen Sutherland, Jennifer Wooten and Laura Weissgerber. Ten great-grandchildren complete her immediate family. Doris did a lot of babysitting, worked at APCO Mfg., Parker Pen, Swiss Colony, always had a vegetable garden and loved her flower gardens. She was a member of the Congregational United Church of Christ, Brodhead, belonged to the Brodhead Garden Club for several years, enjoyed reading, music, traveling the U.S., playing the piano and kept a perfect, clean and neat home, besides cleaning for the church as a team with Chuck and at watering the flowers in downtown Brodhead. She liked to write and wrote long letters to her sisters and nieces to keep them informed of her families activities and also wrote some poetry. She was preceded in death by her parents, husband, two sisters, and a brother in infancy. Funeral services will be held at 11 a.m., Monday, August 31, 2015, at the Congregational United Church of Christ, Brodhead, with Rev. David Frey officiating. Burial will be in Greenwood Cemetery, Brodhead. Visitation will be held at 10 a.m. on Monday until time of services at the church.�

The family of Doris Marjorie (Bush) Sutherland created this Life Tributes page to make it easy to share your memories.