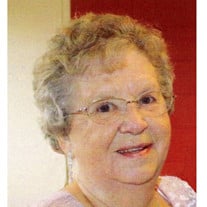 Obituary      Dorothy Mae (Jaques) Speth, age 94, passed away on Saturday, January 12, 2019, at Pleasant View Nursing Home, Monroe, WI. She was born on August 16, 1924 at her Grandmother Huxtable's home in Mineral Point, WI, the child of Lester and Alice (Huxtable) Jaques.      Dorothy attended school in Belmont, WI, graduating in 1942. She later attended Bayless Business College in Dubuque, IA for a short time before moving to Milwaukee to work at the Postal Telegraph with her cousin. Eventually she returned to Belmont to work at the Farmer's Savings Bank in Mineral Point.      Throughout high school, that “Speth boy" had always been around and on her birthday in 1945, James Speth gave her a diamond. They were married on the evening of November 22, 1945 during a snowstorm, at the Belmont Methodist Church. From that day forward a partnership was formed: Jim and Dorothy, Dorothy and Jim.        Their first venture was Jimmies Dairy Bar in downtown Belmont. It was a restaurant with soft serve ice cream and included a dairy and milk route. That was followed by their decision to buy the grocery store and cafe across the street. Always working together and finding opportunities, they eventually found a small restaurant and store in Brodhead, WI, and in 1957 moved their family of four kids and a dog. They named it the Naber Inn. Then in 1965, Jim was hired as the manager of a supper club outside of Brodhead that was to be called The Chalet, which they later purchased. While Jim was busy with the day to day operations, so was Dorothy. She became the bookkeeper, hostess, office manager and whatever else might be needed. Dorothy and Jim were members of the Wisconsin Restaurant Assn - Blackhawk Chapter.  Unfortunately, in 1994, The Chalet was destroyed in a fire and they retired....Or maybe not Dorothy.... Dorothy had always loved sewing. From her high school days taking dresses to the State Fair to making clothes for herself and daughters, the sewing machine was always out. She started her own sewing business, “Espethicially Yours” sewing for others, specializing in bridal alterations. She was a member of Bethlehem Lutheran Church, its quilters group, and over the years made many, many quilt tops that were then finished and sent for mission work.  Dorothy also was a member of the Brodhead Red Hatters.      Dorothy loved entertaining, especially at their home on Decatur Lake where they lived for 30 years. There were great times filled with lots of fun, laughter, food and more food, evenings around a campfire and trips up and down the lake on the pontoon with family and friends or just the two of them. She also loved traveling to many places in the States, but especially the Florida Keys and Gulf Shores, AL. So now she travels again, this time to find that 'Speth Guy." But wherever they are, there will be music and the band better know how to play Tiny Bubbles.      Dorothy is survived by three children; Leonard (Christine) Speth, Baraboo, WI, Kathryn (Tom) Matteson, Davis, IL, Michelle (Randy) Krahenbuhl, Green Bay, WI; fourteen grandchildren and twenty-nine great-grandchildren. She was preceded in death by her parents, husband,  a son Steven, Daughter-in-law Theresa, grandsons Matthew and Wade, great-granddaughter Scarlett and brother Neil.      Funeral services will be held at 1 p.m., Wednesday, January 16, 2019, at the Bethlehem Lutheran Church, Brodhead, WI, with Rev. Peder Johanson officiating. Burial will be in Greenwood Cemetery, Brodhead, WI. Visitation will be held on Wednesday from 11 a.m. until time of services at the church. The D.L. Newcomer Funeral Home, Brodhead, WI, is assisting the family.  Memorials can be made to the Bethlehem Lutheran Church, Brodhead, WI.   To send flowers to the family or plant a tree in memory of Dorothy Mae (Jaques) Speth, please visit our floral store.

The family of Dorothy Mae (Jaques) Speth created this Life Tributes page to make it easy to share your memories.