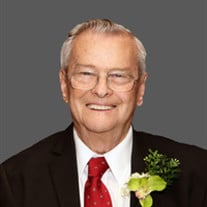 Douglas Eugene Ames, 85, of Brodhead, was called home to Heaven on June 9, 2013 in Janesville, WI. He was born in Wautoma, WI on May 14, 1928, one of thirteen children, to Earl and Marie (nee Kaatz) Ames. Doug served in the U.S. Army from 1951-1953 during the Korean War. He was promoted to Staff Sergeant and received many awards, including two purple hearts. On April 20, 1957, he married Virginia E. Phipps in Waukesha and they resided in Beloit for 13 years before moving to their farm in Avon Township. Doug was a machinist for Warner Electric Brake and Clutch and Ecolab. A loving husband, father, grandfather and friend, he had a great sense of humor and was always willing to lend a hand to anyone who needed it. Doug enjoyed gardening, playing cards, working on cars and both listening to and playing music. He was a member of American Legion Post 209, Orfordville, for many years and enjoyed the weekly euchre games. Doug was preceded in death by his wife, Virginia, a step-son, Fred Gosa, his parents, brothers Lester, Laurence, Arnold and Dewey Ames as well as sisters Ione Schwersinske, June Heinzel and Mary Lou Simons. He will be greatly missed by his daughters; Martha (Raymond) Marden, of Janesville and Linda (John) LaBarre of Cincinnati and son Michael Ames of Janesville, as well as step-son Robert (Deborah) Gosa of Janesville, sixteen grandchildren, twelve great-grandchildren, sisters; Eleanor Schmidt of Port Edwards, WI, Arnis Ames of Harriman, TN, Glora Mae Kraus of Rib Lake, WI, brother; David Ames of Ogema, WI, and many other relatives and friends. Funeral Services will be held at noon, Wednesday, June 12, 2013, at the D.L. NEWCOMER FUNERAL HOME, BRODHEAD, WI, with Pastor Rob Gibson officiating. Visitation will be held from 10 a.m., Wednesday, until time of services. Burial will be in Avon Community Cemetery with full military rites.

The family of Douglas Eugene Ames created this Life Tributes page to make it easy to share your memories.

Douglas Eugene Ames, 85, of Brodhead, was called home to Heaven...

Send flowers to the Ames family.