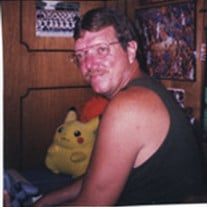 �Duane �Dewey� Paul Lunde, age 49, formerly of Brodhead, passed away on Saturday, January 1, 2011 in Rockford, IL, following a short illness. He was born in Monroe, WI on June 1, 1961 the son of Curtis and Dorothy (Biddick) Lunde. Duane attended Brodhead schools. Throughout his life, he lived in Brodhead, Durand, IL, and Rockford, IL. Duane is survived by two brothers, Lynn (Wanda) Lunde, Brodhead, Dale (Karen) Lunde, Evansville, his only nephew, Brian Curtis Lunde, and many aunts, uncles, and cousins. He was preceded in death by his parents and grandparents. Graveside services will be held at 2:00 p.m. on Thursday, January 6, 2011 at Greenwood Cemetery, Brodhead. The D.L. Newcomer Funeral Home, Brodhead, is assisting the family.�

The family of Duane "Dewey" Paul Lunde created this Life Tributes page to make it easy to share your memories.