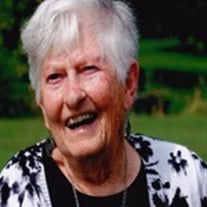 Brodhead - Edith B. Miller, age 90, of Brodhead, passed away peacefully at her home on Thursday, April 18, 2013, surrounded by her loving family. She was born on April 10, 1923 in Philadelphia, PA, the daughter of Edgar and Kathryn (Thornton) Burt. She married Dr. Graham M. Miller on January 29, 1947 in Philadelphia, PA. He passed away on January 2, 2009. Edie graduated in 1945 from Moore Institute of Art in Philadelphia with a degree in fashion design. She worked with Laros of Bethlehem, PA as a blouse and lingerie designer. Edie and Graham moved to Brodhead in 1950. Along with raising six children, she worked with Graham to develop the Brodhead Veterinary Clinic. Art was her passion. While accomplished in stained glass and weaving baskets, Edie continued to challenge herself with watercolor painting and was active in the Wisconsin Regional Artists Association and the Madison Watercolor Society. She won many state and regional awards. Her artwork has been purchased and displayed by businesses and private individuals throughout the country. Edie is survived by six children, Linda (Terry) Stroud, Caledonia, IL, Wayne (Bonnie) Miller, Green Bay, WI, Sandra (Warren) Lada, Bloomfield, MI, Patty (Fred) Manor, Elmwood, WI, Connie (Dale) Holthusen, Mt. Horeb, WI, and Allen (Robin) Miller, Pecatonica, IL; seventeen grandchildren; nine great-grandchildren; and a sister, May Temple, Willow Grove, PA. She was preceded in death by her parents, husband, and a sister, Thelma Abel. A memorial service will be held at 11:30 a.m., Saturday, April 20, 2013, at the United Methodist Church, Brodhead, with Rev. Ellis �Hap� Itson officiating. Burial will be at Greenwood Cemetery, Brodhead. Visitation will be held from 10 a.m. on Saturday until time of services at the church. A memorial fund will be established.

Brodhead - Edith B. Miller, age 90, of Brodhead, passed away peacefully at her home on Thursday, April 18, 2013, surrounded by her loving family. She was born on April 10, 1923 in Philadelphia, PA, the daughter of Edgar and Kathryn (Thornton)... View Obituary & Service Information

The family of Edith B. (Burt) Miller created this Life Tributes page to make it easy to share your memories.