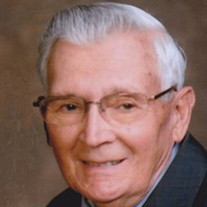 Edwin Schenk, age 78, of Monroe, passed away on Friday, January 9, 2015, at Woods Crossing Nursing Home, Brodhead. He was born on August 4, 1936 in Sylvester Township, Green County, the son of Ernst and Barbara (Rhyner) Schenk. He married Athleen J. Benfer on October 21, 1961, at Staver's Church. Ed grew-up and farmed all of his life in Sylvester Township, graduating from Juda High School in 1954 and attended the U.W. Short Course. He was a member of St. John's United Church of Christ, Monroe and served on the council and other committees. He was a 50 year member of the Green County Rifle League and treasurer of the Moore Cemetery for many years. Ed and his wife enjoyed traveling, especially in the mountains of the Western U.S. and were able to visit all 50 states and 17 countries. Ed enjoyed automotive sports and had obtained his pilots license. He is survived by his wife Athleen; a son, David (Deb) Schenk, Monroe; a daughter, Kim (Joe) Wedig, Darlington, WI; six grandchildren, Joshua and Matthew Schenk, Justin, Mykel, Mitchell and Levi Wedig. He was preceded in death by his parents and a sister, Gertrude. Funeral services will be held at 11 a.m., Wednesday, January 14, 2015, at St. John's United Church of Christ, Monroe, with Pastor Todd Hackman officiating. Burial will be in Moore Cemetery, Decatur Township, Green County. Visitation will be held from 4 p.m. until 8 p.m., Tuesday, at the D.L. NEWCOMER FUNERAL HOME, BRODHEAD, WI. A memorial fund will be established.

The family of Edwin Schenk created this Life Tributes page to make it easy to share your memories.

Edwin Schenk, age 78, of Monroe, passed away on Friday, January...

Send flowers to the Schenk family.