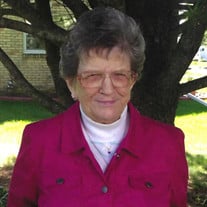 Albany – Elizabeth “Liz” Widmer, age 88, passed away on August 14, 2021 at Collinwood Assisting Living in Brodhead. She was born on February 26, 1933 in Magnolia Township to Ernest and Beatrice (Setzer) McCaffrey. She married the love of her life, Conrad Widmer on April 20, 1952. Liz was a stay at home mom whose greatest love was her children and grandchildren. Conrad and Liz enjoyed the simple pleasures in life such as driving the countryside to see the scenery, visiting their children and playing dice and cards. Liz loved a good game of aggravation, doing crossword puzzles and watching legendary shows such as Hee Haw and Statler Brothers Show. Liz is survived by two daughters and a son, Karen (Dale) Lunde of Evansville, WI, Peggy Miller of Footville, WI and Randy (Laurie) Widmer of Freeport, IL; 7 grandchildren, Brian Parmer, Dawn Wells, Jennifer Heisz, Derek Widmer, Justin Widmer, Brian Lunde, Lynn Miller and 7 great grandchildren. Other survivors include two sisters, Joyce Richards and Donna Jaggi. Liz was preceded in death by her parents, her husband, Conrad; a daughter, Vickie Olson, a son Mike Widmer, one sister and two brothers. Every life leaves something beautiful behind. A memorial visitation will be held at the DL Newcomer Funeral Home, 1105 E. 9th Avenue in Brodhead, WI on Sunday, August 29, 2021 from 11:00 AM to 1:00 PM. Burial of cremated remains will happen at a later time. www.dlnewcomerfuneralhome.com 608-897-2484

The family of Elizabeth "Liz" Widmer created this Life Tributes page to make it easy to share your memories.

Send flowers to the Widmer family.