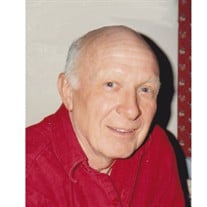 Ernest J. Exum, age 93, of Brodhead, passed away on Thursday, March 2, 2017, at his home. He was born on March 2, 1924 in Grafton, WV, the son of Irving E. and Florence (Randolph) Exum. He married Margaret J. Lobmeyer on June 30, 1956 at St. Nicholas Catholic Church, Kinsley, KS. Ernie quit High School to join the U.S. Navy during World War II, after his brother had been captured. He served from 1942 until 1948 in the Pacific Theatre on a naval destroyer. After the war he moved to Chicago where he met Margaret and was a tool and die maker. In 1967 at the age of 43 he walked away from his successful career in Chicago and moved his family to Wisconsin to pursue his life long dream of farming. For the last 50 years he lived that dream. After earning his GED through the military, he was a life long learner. Avidly reading a wide array of subjects. He enjoyed reading, playing pinochle with his family, Sunday drives and farming with his five boys. His biggest success was his family. Driven to rise from his beginnings in poverty, he went on to raise 5 boys with Marge. He was most proud that all of his sons graduated from college, an opportunity he didn�t have. He is survived by his wife, Margaret; four sons, Ken (Cathy), Simi Valley, CA, Doug (Laurie), Brodhead, WI, Mike (Renee), Madison, WI, and Curt (Marie) Exum, Oyster Bay, NY; a daughter-in-law, Jennifer Exum, Silsbe, TX; ten grandchildren, Noah, Theresa, Alexander, and Emily Exum, Eryka (Adam) Cook, Kelsey and Austin Exum, Jesse (Paul) Brandenburg, Cody, and Cassidy Exum. He was preceded in death by his parents, a son John in 2004, and brothers, Wilburn (Roberta), Harold and Kenneth in infancy. A Mass of Christian Burial will be held at 10:30 a.m., Monday, March 6, 2017, at St. Rose of Lima Catholic Church, Brodhead, WI, with Father Larry Bakke presiding. Burial will be in Greenwood Cemetery, Brodhead. Visitation will be held from 3 p.m. until 5 p.m. on Sunday, at the D.L. Newcomer Funeral Home, Brodhead, WI. A thank-you to Heartland Hospice of Rockford, especially Alison, Kristin, Pam, Abby and the rest of the staff. In lieu of flowers memorials may be sent to UW Carbone Cancer Center at: http://uwhealth.org/donateuwccc

The family of Ernest Joe Exum created this Life Tributes page to make it easy to share your memories.

Send flowers to the Exum family.