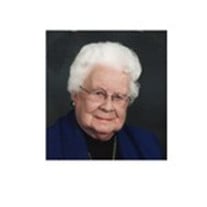 Brodhead - Evelyn O. Reed, age 90, of Brodhead, passed away on Friday, April 16, 2010, at her home. She was born on February 21, 1920 in Argyle, WI, the daughter Ole and Amanda (Nybroten) Greenhill. She married Robert W. Reed on April 26, 1941 in Argyle, WI. He passed away on March 10, 1983. Evelyn and her husband farmed near Blanchardville prior to moving to Brodhead in 1956. Evelyn was a homemaker and loved baking, and gardening. Her #1 love was being with her family. She was a member of the United Methodist Church of Brodhead. She is survived by three sons; Jeff (Diane) Reed, Brodhead, Kim (Patricia) Reed, Naperville, IL, Kurt (Suanne) Reed, Chicago, IL, a daughter, Ann Marie (Ronald) Adams, Loveland, CO, 8 grandchildren and 4 great-grandchildren. She was preceded in death by her husband, parents, two brothers, Gilbert and Casper, and a sister, Gunelda Torkelson. Funeral services will be held at 10:30 a.m., Wednesday, April 21, 2010, at the United Methodist Church, Brodhead, with pastors Steve Groves and Mary Gafner officiating. Burial will be in Greenwood Cemetery, Brodhead. Visitation will be held from 5:00 p.m. until 7:00 p.m., Tuesday, April 20, 2010, at the D.L. NEWCOMER FUNERAL HOME, BRODHEAD. Memorials may be made to the United Methodist Church, Brodhead, HospiceCare, Inc., or a charity of your choice.

The family of Evelyn Orpha (Greenhill) Reed created this Life Tributes page to make it easy to share your memories.