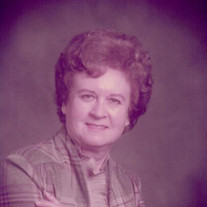 Obituary FAYE AYRES, age 99, Brodhead, Wisconsin, passed away on December 20, 2019 at Janesville Mercy Hospital. Faye was born on May 4, 1920 in Baileyville, Illinois, to Benjamin and Alice (Zweep) Schuur. She is survived by her daughter Marla Ayres-Laney of Stamford, Connecticut, eight grandchildren, and a multitude of great-grandchildren, great-great-grandchildren, nieces and nephews living all over the US. She was preceded in death by her husband Raymond C. Ayres, her daughter Bonnie Jean Ayres, and her son Douglas R. Ayres, as well as her sisters Joan Helmenstine, Verna Corell and Alice Simonson, and her brothers Marvin (Jim) Schuur, Harry Schuur and Raymond “Bud” Schuur. To the very end of her life, Faye’s memory remained intact, and as anyone who has lived to be 99 years of age does, Faye had many stories to tell. She told the story of how she started out life as a tiny, two-pound baby whose incubator was a dresser drawer lined with bed warmers which were constantly changed throughout the day to keep her tiny body warm. She said she was fed whiskey from an eye dropper as a stimulant (perhaps that’s why she did not partake of alcohol in adulthood). To think that this baby survived and then lived to be nearly 100 years old is a testament to her inner strength. She told stories about growing up on a farm and of the hard work shared by all family members. She told funny stories such as when she tied a string to her horse’s tail and on her way to or from school, if someone would call out something she didn’t like, she would lift the tail, exposing…well…you know what. She told stories about the shenanigans that she and her siblings would get into…sneaking home canned peaches and cookies and fresh berries when they thought their mother wasn’t looking (she was). And she told the story of why she left the farm and headed to Chicago to start a new life, and where she met the love of her life, Raymond. Faye’s sharp memory was often called upon to set the record straight on her husband’s complicated lineage. She was even able to reveal the identity of one nephew’s real father, for which he is forever grateful. Faye found great pleasure in helping those in need and did so often until she lost her sight. She adjusted to her new way of life as best she could. And being the proud and stubborn Dutch woman that she was, she fiercely fought the notion that she needed help herself, even as her health began to fail. Her ability to manage living alone while totally blind for many years was amazing to all who knew her. She was a very special lady and will be sorely missed by many. Her wishes, reiterated emphatically in her last hours, were that she wanted no funeral and only a private graveside ceremony. Those wishes will be granted. The ceremony will be held in March at Twelve Mile Grove Cemetery, Pecatonica, Illinois, where she will rest with many of her siblings and other family members. For additional information, please contact Marla at 917-405-6023 or email [email protected] To send flowers to the family or plant a tree in memory of Faye (Schuur) Ayres, please visit our floral store.

Obituary FAYE AYRES, age 99, Brodhead, Wisconsin, passed away on December 20, 2019 at Janesville Mercy Hospital. Faye was born on May 4, 1920 in Baileyville, Illinois, to Benjamin and Alice (Zweep) Schuur. She is survived by her daughter Marla... View Obituary & Service Information

The family of Faye (Schuur) Ayres created this Life Tributes page to make it easy to share your memories.

Send flowers to the Ayres family.