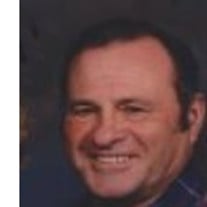 Brodhead - Forest �Fritz� A. Schryvers, age 80, of Brodhead, passed away on Saturday, August 3, 2013, at his home. He was born on May 28, 1933 in Rosebud, SD, the son of Ira and Edna (VanEgmond) Schryvers. He married Mary Ann Coleman. She passed away on August 21, 2008. Fritz was a longtime farmer in Spring Valley Township. He also was a trucker for many local farms and a log-hauler in Idaho. He loved to hunt, fish, and travel. He is survived by his companion, Stella Clark, Brodhead; two daughters, Mary (Randy) Klitzman, Churubusco, IN, Barbara Viola, Brodhead; two sons, Nathan Schryvers, Brodhead, David Schryvers, Andrews, IN; two sisters, Leona Kruizinga, Delavan, Elaine Holleman, Beloit; four granddaughters and six great-grandchildren. He was preceded in death by his parents, wife, two sons, Charles and Steven, and a sister Ruth. Memorial services will be held at noon on Friday, August 9, 2013, at the D.L. NEWCOMER FUNERAL HOME, BRODHEAD, WI, with Calvin Schaver officiating. Burial will be in Greenwood Cemetery, Brodhead. Visitation will be held from 10:30 a.m., Friday, until time of services at the funeral home.

The family of Forest "Fritz" Aron Schryvers created this Life Tributes page to make it easy to share your memories.