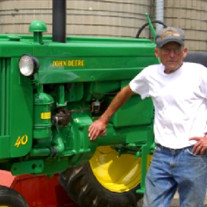 Obituary      Fritz Badertscher, age 77, of Brodhead, died peacefully with his family present after a long illness on April 25, 2019 at the Agrace Hospice in Janesville.  He was born on April 28, 1941 in Monroe, WI,  the son of Garde and Alice (Schneider) Badertscher. He married Phyllis Lohmeier on December 3, 1966 in Davis, IL      Fritz graduated from Brodhead High School in 1960.  After graduation he entered the service by joining the Navy and served on the USS 481 Requin submarine.  After 4 years of service, he farmed with his father on the family farm south of Brodhead.  Fritz worked at Davis Implement for a couple of years and in 1979 he and Phyllis decided to start farming on their own in Twin Grove and eventually returned to the family farm in Brodhead in 1984.  In 1999, he sold their dairy herd and then started raising grain and beef. In 2008 they sold the equipment and beef to retire.  As his health failed, he missed being able to put crops in and as he would say “dig in the dirt”.  Fritz loved to fly and was active in the Brodhead Airport and a charter member of EAA Chapter 431.  He was a Spring Grove town board member for the past 18 years.  He enjoyed the yearly trip to Colorado to spend time with his granddaughter.       He is survived by his wife, three daughters, Ann (Cliff Clevenger), Highlands Ranch CO,  Nora (Brad Stottlemyer), Lake Geneva WI, Kelly Badertscher, Brodhead; a granddaughter,  Rylee Clevenger,  Highlands Ranch, CO; two sisters, Sue(Rolf) Winters, South Thomaston, ME, Liz (Arlie) Runaas, Albany WI, and several nieces and nephews.  He was preceded in death by his parents & grandparents.      A Celebration of Life will be held at 11 a.m., Tuesday, April 30, 2019, at D.L. Newcomer Funeral Home, Brodhead, WI, with Rev. Krystal Goodger officiating, with military rites to follow.  Visitation will be held from 4 p.m. until 7 p.m. on Monday at the funeral home.    To send flowers to the family or plant a tree in memory of Frederic "Fritz" S. Badertscher, please visit our floral store.

Obituary      Fritz Badertscher, age 77, of Brodhead, died peacefully with his family present after a long illness on April 25, 2019 at the Agrace Hospice in Janesville.  He was born on April 28, 1941 in Monroe, WI,  the son of Garde and Alice... View Obituary & Service Information

The family of Frederic "Fritz" S. Badertscher created this Life Tributes page to make it easy to share your memories.