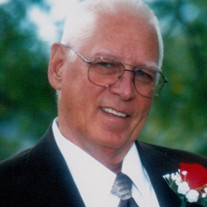 Brodhead � Frederick �Fritz� Jaggi, age 79, of Brodhead, passed away unexpectedly on Monday, January 18, 2016, at the Monroe Clinic Hospital, Monroe, WI. He was born on November 30, 1936 in Milwaukee, WI, the son of Casper and Frieda (Fuhrer) Jaggi. He married Donna McCaffrey on April 16, 1955 in Brodhead. They celebrated their 60th Wedding Anniversary in 2015. Fritz graduated from Brodhead High School. He was a truck driver for 42 years, receiving many awards for safe driving; two of which were the Million Mile and the Two Million Mile Club. He helped his parents in their cheese factory, which was the Brodhead Swiss Cheese factory and also helped Karl Brandenburg with bluegrass music concerts. When Karl passed away, Fritz took over and ran it for 19 years. He enjoyed bluegrass music, trucks, family and his grandchildren's activities. Fritz belonged to the Smith Masonic Lodge #0031, Monroe, WI, and Bethany Lutheran Church, Brodhead. Fritz is survived by his wife, Donna, Brodhead; children, Cindy (Dennis) Haberman, Susan (Steve) Olsen, both of Brodhead, Sandra (Kevin) Axon, Oshkosh, Gerald Jaggi, Janesville; 11 grandchildren, 13 great-grandchildren and 2 great great-granddaughters. He was preceded in death by his parents and granddaughter Teri Haberman. Funeral services will be held at 11 a.m., Friday, January 22, 2016, at Bethany Lutheran Church, rural Brodhead, WI, with Rev. Richard Thickpenny officiating. Burial will be in Greenwood Cemetery, Brodhead,WI. Visitation will be held on Thursday, January 21, 2016, from 5 p.m. until 7:30 p.m. At the D.L NEWCOMER FUNERAL HOME, BRODHEAD, WI. A Masonic Service will be held at 7:30 p.m.

The family of Frederick "Fritz" C. Jaggi created this Life Tributes page to make it easy to share your memories.