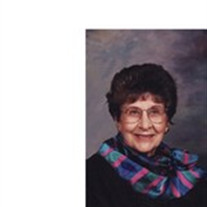 Juda/Brodhead - Frieda M. Kaderly, age 95, of Juda, passed away on Monday, February 15, 2010, at her home. She was born at the Pfund Cheese Factory in Green County on August 2, 1914, the daughter of Emil and Anna (Schmid) Baumgartner. Her first marriage was to Edward Ruef in 1934. They had farmed in Rock City, IL, Juda, and Brodhead. Edward passed away in 1977. She then married Edward J. Kaderly in 1981. Edward passed away in 2005. Frieda graduated from Monroe High School in 1933. Frieda will be remembered for her cake decorating artistry, enjoying fine dining. She was an expert in the kitchen, which she had learned from her mother, who was a chef in Switzerland. She was very proud of her Swiss heritage, She also loved flower and vegetable gardening, traveling, dancing, bird watching, and card playing, especially Euchre. She spent several years working at Swiss Colony during the Christmas season. Frieda was an active member of St. Rose of Lima Church, Brodhead, Spring Grove Farmerettes, and Modern Mavericks Homemakers. She is survived by her children, Shirley Fairman, James (Kris) Ruef, both of Brodhead, Edward (Carole) Ruef, Juda, Janet (Wayne) Boling, McDonough, GA, ten grandchildren, and eight great-grandchildren. She is also survived by her stepchildren, Tom (Mary) Kaderly, Freeport, IL, Edward S. (Carolyn) Kaderly , Sam (Janet) Kaderly, Nancy (Rollie) Coplein, all of Juda, Rudy (Judy) Kaderly, Beloit, Jake (Ann) Kaderly, Monticello, and Marie Kaderly, Monroe. She was preceded in death by her parents, husbands, a sister, Ellen Cullen, four brothers, Walter, Emil Jr., Alfred Baumgartner, and Robert, in infancy. Visitation will be held from 5:00 p.m. until 7:00 p.m., Friday, February 19, 2010, at the D.L. NEWCOMER FUNERAL HOME, BRODHEAD, WI. A Mass of Christian burial will be held at 10:30 a.m, Saturday, February 20, 2010, at St. Rose of Lima Catholic Church, Brodhead, with Father Michael Moon presiding. Private family burial will be in Greenwood Cemetery, Brodhead. A memorial fund will be established.

Juda/Brodhead - Frieda M. Kaderly, age 95, of Juda, passed away on Monday, February 15, 2010, at her home. She was born at the Pfund Cheese Factory in Green County on August 2, 1914, the daughter of Emil and Anna (Schmid) Baumgartner. Her first... View Obituary & Service Information

The family of Frieda M. (Baumgartner) Kaderly created this Life Tributes page to make it easy to share your memories.