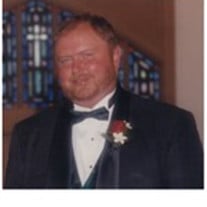 Brodhead - Gary Eggen Olson, age 56, passed away on Thursday, May 31, 2012, at St. Mary�s Hospital, Janesville, after a courageous battle with colon cancer. He was born on November 30, 1955 in Monroe, WI, the son of Roger �Bud� and Elvira �Happy� Olson. He was the youngest of 7 children. Gary graduated from Brodhead High School in 1973. He farmed with his dad for several years before moving to Janesville, where he managed Crazy Joe�s furniture store. Most recently, he was employed as a fork lift operator at Stoughton Trailers, Stoughton. Gary enjoyed going to Milwaukee Bucks games and watching the Green Bay Packers and Milwaukee Brewers. He also had a good time playing cards with the guys in Afton and getting together with family and friends, where his sense of humor was always on display. Gary is survived by his brothers: Jim (Rosemary) Olson, Albany, Dan (Lorraine) Olson, Brodhead; sisters: Susan (Dick) Oliver, Monticello, Evie (Keith) Schwartzlow, Brodhead; a brother-in-law, Ron Colden, Prairie du Sac; and several nieces and nephews. He was preceded in death by his parents and sisters Julie, in 1962, and Beth, in 2011, both of diabetes. Funeral services will be held at noon on Monday, June 4, 2012 , at the D.L. NEWCOMER FUNERAL HOME, BRODHEAD. Burial will be in Luther Valley Cemetery. Visitation will be held from 10 a.m. until time of services at the funeral home. Gary�s favorite saying was �It is what it is,� but we know he�d also want to tell people to have a colonoscopy when the doctor recommends it. We�re gonna miss you, little brother.

The family of Gary Eggen Olson created this Life Tributes page to make it easy to share your memories.

Send flowers to the Olson family.