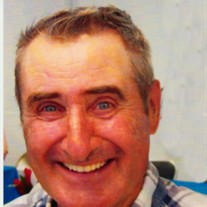 Germaine R. Kaderli, Sr., age 82, of Monroe, formerly of Brodhead, passed away on Friday, September 8, 2017, at Pleasant View Nursing Home, Monroe, WI. He was born on October 8, 1934 in Monroe, WI, the son of Fred and Wilma (Mauerman) Kaderli. He married Twila J. Timmerman on February 4, 1956 in Magnolia Township. She passed away on December 27, 2005. Germaine had the reputation of being a hard worker, farming in Spring Valley Township, Rock County. He also had lived in Albany before moving to Monroe. He loved farm life, being on his tractor doing fieldwork and tending to his animals. He is survived by his children, Germaine (Marcia Miller) Kaderli, Jr., Brodhead, Dawn Kaderli, Monroe, WI, Joe (Korey) Kaderli, Yuma, AZ, Diane (Spencer) Hutchinson, Juda, WI; 9 grandchildren and 11 great-grandchildren. He was preceded in death by his wife, a daughter Leona and son David. Funeral services will be held at 11 a.m., Thursday, September 14, 2017, at the D.L. Newcomer Funeral Home, Brodhead, WI with Steve Owen officiating. Visitation will be held from 10 a.m. on Thursday until time of services at the funeral home. Burial will be in Greenwood Cemetery, Brodhead.

The family of Germaine R. Kaderli, Sr. created this Life Tributes page to make it easy to share your memories.

Send flowers to the Kaderli, family.