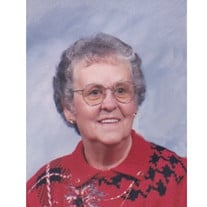 Gladys Charlene Foss Helland, age 94, of Brodhead, passed away on Wednesday, April 26, 2017, in Amery, WI with family by her side. She had been staying with her daughter Joyce for the last 6 months. Gladys was born in Sylvester Township, Albany, WI, on January 11, 1923, the daughter of Clarence John and Leatha Marie (Miller) Foss. She married Gordon K. Helland on January 21, 1944 at the home of his parents in Juda, WI. He passed away on January 31, 2016. Gladys attended Monticello High School and graduated from Monroe High in 1940. She had worked at the Monroe Times before marrying Gordon. She was a member of the Brodhead Methodist Church, Lydia Circle and the United Methodist Church Women. She farmed with Gordy till 1972 when they moved in to Brodhead. She gardened for many years, loved her family and enjoyed the many trips they took with friends and family. She is survived by a son, Keith (Rae) Helland, Juda; daughters, Joyce Helland, Amery, WI, Cindy (Gale) Borgmann, Oshkosh, WI, Barbara (Ted) Mertens, Brodhead; and several nieces and nephews; seven grandchildren, Troy ((Hanna) Helland, Brodhead, Kristi Helland, Illinois, Steven (Deb) Morelock, Sheila Anderson, both of Amery, WI, Lon (Jenny) Borgmann, Oshkosh, WI, Kathi Borgmann, Ithaca, NY, Jason (Keri) Mertens, Brodhead; four great-granddaughters, Kalli and Connie Olson, Bailey Anderson, Allison Borgmann; four great-grandsons, Ryan Borgmann, Quentin, Eli and Oliver Mertens; three step great-grandchildren, Jonathan, Carol, Naomi; three great great-granddaughters, Taylor, Paisley, Kailyn; sisters-in-law, Sue Helland, Monroe, Bergene Maxted, Beloit and a brother-in-law, Bruce Helland, Quarryville, PA. She was preceded in death by her parents, husband, two sons, David in infancy in 1946 and Konnie in 1968, and a sister, Marjorie Dooley. A Celebration of Life for Gladys and Gordy will be held from 11 a.m. until 2 pm. on Saturday, May 13, 2017, at the Juda Community Center, Juda, WI. Memorials may be made to the Brodhead Park District for playground equipment for the handicapped.

Gladys Charlene Foss Helland, age 94, of Brodhead, passed away on Wednesday, April 26, 2017, in Amery, WI with family by her side. She had been staying with her daughter Joyce for the last 6 months. Gladys was born in Sylvester Township, Albany,... View Obituary & Service Information

The family of Gladys Charlene (Foss) Helland created this Life Tributes page to make it easy to share your memories.