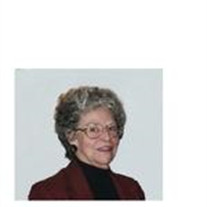 Gloria Jean Paulson Davis Tomten, age 79, of Janesville, passed away on Thursday, October 14, 2010, at the Skaalen Home in Stoughton. She was born on September 2, 1931 in Brodhead, WI, the daughter of Chester and Ethel (Visger) Paulson. Her first marriage was to Robert E. Davis on June 6, 1954. She then married Donald Tomten on September 18, 1982. Gloria Jean was raised Lutheran and was confirmed at Bethany Lutheran Church, rural Brodhead. She graduated from Brodhead High School in 1949 and had worked at the Brodhead Telephone Co., the Gilman Co., Janesville, and retired from the Panoramic Corp., Janesville. She was a member of the Order of the Moose, Janesville, and an avid bowler. She also enjoyed knitting and crocheting. Gloria loved her parents very much and thought the world of her father and husband. She will always be remembered by her smile, sense of humor, and kind words. She is survived by her husband, Don, children, Suzette (Dave) Goodin, Ted (Kimberly) Davis, both of Brodhead, Douglas (Lori) Davis, Janesville, grandchildren, Kari (Nick) Lerch, Kayci, Trenten, Zackery and Mariah, great-grandchildren, Jordan, Jerzie, and Kennedy, step-children, Robert (Kona) Tomten, Viroqua, WI, Cynthia Benner, Spokane, WA, Deborah (Alan) Gillespie, Whitewater, WI, Richard (Becky) Tomten, Milton, WI, and six step-grandchildren. She was preceded in death by her parents and a brother Gordon. Funeral services will be held at 11:00 a.m., Monday, October 18, 2010, at the D.L. NEWCOMER FUNERAL HOME, BRODHEAD, WI, with Rev. Ronald E. Massen officiating. Burial will be in Greenwood Cemetery, Brodhead. Visitation will be from 6:00 p.m. until 7:30 p.m., Sunday, October 17, 2010 and from 10:00 a.m., Monday until time of services at the funeral home.�

Gloria Jean Paulson Davis Tomten, age 79, of Janesville, passed away on Thursday, October 14, 2010, at the Skaalen Home in Stoughton. She was born on September 2, 1931 in Brodhead, WI, the daughter of Chester and Ethel (Visger) Paulson. Her... View Obituary & Service Information

The family of Gloria Jean (Paulson) Davis Tomten created this Life Tributes page to make it easy to share your memories.