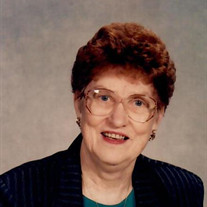 Obituary Jefferson – Gloria Margaret (Lunde) Haroldson, age 95, departed this life on Thursday, December 19, 2019 at Sunset Ridge Assisted Living in Jefferson, WI.  She was born on April 12, 1924 in Brodhead, WI, the daughter of Tilman and Gladys (Bliss) Lunde.  She graduated from Brodhead High School in 1942, attending Milton College for a short time studying music/opera and working at the Bank of Brodhead before she married Curtis R. Haroldson on July 20, 1946 at her home in Brodhead.  They farmed in Avon Township for over 27 years and raised 4 children.  She returned to work at the Bank of Brodhead in 1967 and worked as a head teller, assistant cashier and personnel officer until her retirement in 1986. They moved from their farm into Brodhead in 1973 where she lived until 1999. Gloria was an active member of Bethlehem Lutheran Church in Brodhead.  She served on many committees and also directed various church choirs for many years.  In the community, she was a member of the White Gift. Music was a huge part of her life, as she sung many solos, played piano and directed choirs.   She enjoyed music, traveling, reading, crossword puzzles, discussing politics, watching the Badgers and Packers, and attending Haroldson reunions.  Gloria enjoyed spending time with friends and family, especially grandchildren and great-grandchildren. Curtis preceded her in death in 1997, after which she moved to a retirement village in Rockford, IL in 1999. She enjoyed many of the activities there including being the Peterson Meadows Choir Director at the age of 80. Also a member of Alpine Lutheran Church.   Gloria is survived by her children, Alice (John) Guld, Barb (Craig) Shelton and Dave (Ann) Haroldson; 10 grandchildren; 18 great grandchildren; 2 sisters, Evelyn Williams and Sharon Homernik; brother-in-law, Paul (Carole) Haraldson and many nieces, nephews and other relatives.  She was preceded in death by her parents, her husband, Curtis Robert Haroldson in 1997 and a son, Robert Curtis in 2007. The family would like to thank the staff at Sunset Ridge Memory Care, Care Wisconsin and Rainbow Hospice for their loving care and support they provided to Gloria and her family and for all the numerous hugs that brought a smile to our mom during that time. A memorial celebration of Gloria’s life will be held at the Bethlehem Lutheran Church, 405 East 9th Avenue in Brodhead on Friday, January 3, 2019 at 11:00 AM.  Pastor Peder Johanson will officiate.  A visitation will also be held at the church on Friday from 10:00 AM until the time of service. In lieu of flowers, memorials can be directed to the Bethlehem Lutheran Church in her memory. The DL Newcomer Funeral Home in Brodhead is assisting the family.           608-897-2484    www.dlnewcomerfuneralhome.com To send flowers to the family or plant a tree in memory of Gloria Margaret (Lunde) Haroldson, please visit our floral store.

The family of Gloria Margaret (Lunde) Haroldson created this Life Tributes page to make it easy to share your memories.