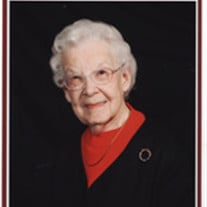 Brodhead - Grace M. Shrier, age 89, of Brodhead, passed away on Monday, October 3, 2011, at Wood�s Crossing Nursing Home, Brodhead. She was born on August 22, 1922 in Rock County, WI, the daughter of Ernest and Alice (Stuckey) Berndt. She married Ronald E. Shrier on June 10, 1943 in Monroe. He passed away on June 8, 1979. Grace and her husband had farmed in Magnolia, Decatur, and Spring Grove Township. She graduated from Brodhead High School in 1940, was a member of The United Methodist Church, Brodhead, Christian Women�s Club, and the Needle Clickers. She loved needlework, crossword puzzles, game shows, music, and being with family and friends. She is survived by three daughters, Maureen Shrier, Carolyn (Ronald) Goodman, both of Brodhead, Dolores Ace, Mt. Horeb, WI, seven grandchildren and three great-grandchildren. She was preceded in death by her parents, husband, a son, Ronald Jr. in 1976, a brother, Hilton Berndt, and a sister, Lona Malcook. Funeral services will be held at 11 a.m., Saturday, October 8, 2011, at The United Methodist Church, Brodhead, with Rev. Ellis �Hap� Itson officiating. Burial will be in Greenwood Cemetery, Brodhead. Visitation will be from 5 p.m. until 7 p.m., Friday, at the D.L. NEWCOMER FUNERAL HOME, BRODHEAD, WI.�

The family of Grace M. (Berndt) Shrier created this Life Tributes page to make it easy to share your memories.