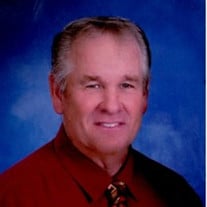 Greg L. Pryce, age 64, of Brodhead, passed away on Friday, December 6, 2013, at Mercy Hospital, Janesville. He was born on July 27, 1949 in Monroe, WI, the son of William and Marilyn (Flora) Pryce. He married Cindy Olson on August 1, 1970 in Albany, WI. Greg graduated from Albany High School in 1967 and was a member of the Albany United Methodist Church. He was a livestock dealer in the Brodhead area for many years and raised Mammoth Jack and horses. He loved going to all sporting events at Brodhead and Delavan, especially watching his grandchildren play. He enjoyed volleyball and softball and also coaching Azzy and McKenna. He was a great conversationalist and enjoyed family vacations in the west. The most important thing to Greg was his family. He is survived by his wife, Cindy, of Brodhead; children, Davis (Wendy) Pryce, Evansville, WI, Danielle (Brian) Venden, Brodhead, Danae (Bill) Bump, Delavan, WI; siblings, Jeff (Kristy) Pryce, Albany, Peggy Keeney, Brodhead; his father, William Pryce, Monroe; in-laws, Thorvald (Pauline) Olson, Brodhead; a sister-in-law, Sharon Pryce, Albany; and fifteen grandchildren. He was preceded in death by his mother and a brother, Harry Pryce. Funeral services will be held at 11 a.m., Tuesday, December 10, 2013, at the Albany United Methodist Church, with Rev. Pat Soddy officiating. Burial will be in Hillcrest Cemetery, Albany. Visitation will be held from 4 p.m. until 7 p.m., Monday, at the church. A memorial fund will be established.

The family of Greg L. Pryce created this Life Tributes page to make it easy to share your memories.

Send flowers to the Pryce family.