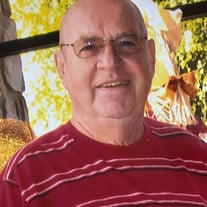 Obituary      Gustave “Gus” E. Bonier, age 79, of Brodhead, passed away on Monday, September 17, 2018, at his home. He was born on October 30, 1938 in Beloit, WI, the son of Gustav and Adelaide (Stowell) Bonier. He married Jean A. Wyss of Monroe on April 15, 1967.      Gus graduated from Beloit Memorial High School in 1956. He entered the U.S. Army in 1960 and was discharged in 1962. He had worked for Flexicore of S. Beloit, IL, and later retired from Debco Corp. of Janesville, WI, after working for them for 28 years. Gus was one of the founders of the Brodhead Youth Ball Program. He coached Little League baseball for 12 years, taking his team to Sun Prairie for the championship. The Brodhead team and parents won the trophy for Best Sportsmanship. He was very proud of the team and the parents for their support. Gus had many activities, but the most pleasurable was helping his children when they needed him. And they in turn were there for him when he needed them.      He is survived by his wife Jean of 51 years, and two children, Laurie (Randy) Sommerfeldt, and William “Bill” Bonier and his grandson, Braydon, (nicknamed Booker), all from Brodhead. He is further survived by his sister, Karen (Steve) Olson, Menomonee Falls, WI, and her children, Mike (Marie) Lynch, Dan (Ana) Lynch, Tim (Lita) Lynch, Pat (Elizabeth) Lynch, Larry (Renee) Lynch, Kathy Lynch (Andy), and Cheryl Neuleib and their children; a sister-in-law, Karen R. Wyss, Monroe, WI and her children, Angela Hellenbrand (Kenny Ramm), Dawn (Dale) Meier, Amy (Joe) Boland, Dana (Jeff) Felder, their children and many other relatives. He was preceded in death by his parents, grandparents Edward and Lena Bonier, a brother-in-law, Ken Wyss, his in-laws, Carl and Laura Wyss and aunts and uncles.      Gus was an advocate of Home Dialysis, being in the comfort of his home.      Graveside services will be held at noon on Friday, September 21, 2018, at Greenwood Cemetery, Brodhead, WI, with Rev. Cal Schaver officiating. A luncheon and greeting of family and friends will follow the graveside service at the Congregational United Church of Christ, Brodhead. To send flowers to the family or plant a tree in memory of Gustave "Gus" E. Bonier, please visit our floral store.

The family of Gustave "Gus" E. Bonier created this Life Tributes page to make it easy to share your memories.