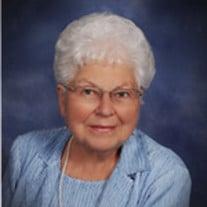 Helen Rose Markham, age 81, of Brodhead, passed away on Thursday, February 10, 2011, at the Monroe Clinic Hospital. She was the youngest daughter of Fred and Louise(Kueng) Gerber, born March 5, 1929 in Brodhead, Wisconsin. Helen was proud of her Swiss heritage, grew up on a cheese factory, and attended the Jordan Prairie School, a one-room, country grade school. She graduated from Brodhead High School in 1946 where she was active in band and cheerleading. She earned her nursing degree in 1950 from the Methodist Hospital School of Nursing in Madison. In 1951, Helen married Marshall �Danny� Markham. She worked as a registered nurse at UW Hospital in Madison before returning to Brodhead in 1952. Helen retired from the former St. Clare Hospital, currently the Monroe Clinic Hospital, in 1994 where she had worked as a nurse for many years. In addition to her nursing career, she also set type and read proof at the Markham family-owned newspaper, The Independent Register, for over 30 years, retiring in 1999. Helen loved singing and was a former member of the Down Beats barbershop quartet, Sweet Adelines, and church choir. She was an avid sports fan of the Brodhead Cardinals, Oostburg Flying Dutchmen, Badgers, and Packers. She had volunteered with the after-school reading program at Albrecht Elementary School. She enjoyed attending her grandchildren's music, drama, and sporting events. She also loved fishing with the family in Minocqua. Until her recent illness, Helen was an active member of the Brodhead United Methodist Church. She enjoyed participating in a YMCA swimming exercise class, her bridge card club, her jigsaw puzzle group, Red Hat Society, and outings with friends. Helen is survived by her three sons: Marshall �Kim� (Kathy), Kurt (Barb), all of Brodhead, and Kent (Vicki) of Oostburg, Wisconsin; two daughters: Colet (Gary) Cook of Oregon, Wisconsin, and Colleen (Fred) Jennings of Lake Stevens, Washington; AFS son and family Drs. Julio and Marissa Rodriguez, David, Gabriel and Elizabeth, all of Brodhead; grandchildren: Emily (Nathan) Broome, Angela (Kevin) Geiwitz, Andy, Neil (Michelle), Adam (Nikki), Brandon, Derek, Caleb, Amanda, Miranda, and Isaac Markham, Cody and Alex Cook, Cassandra and Jessica Jennings; great-grandchildren: Brittany and Megan Broome, Camaron and Leilah Markham, Ayvah King and Rhiannon Keen; sisters-in-law Anita (Jerry Reed) Gerber and Annette Markham; and brother-inlaw Urban (Rosalie) Miller. She was preceded in death by her parents; her husband, in 2008; her sisters Gertrude Miller and Annabel Ganshert in 1955; her brother Werner in 1994; brothers-in-law Paul �Joe� Ganshert in 1955 and Dick Markham in 1996. Funeral services will be held at 11 a.m. Monday, February 14, at the Brodhead United Methodist Church, with Pastor Steve Groves officiating. Burial will be in Greenwood Cemetery, Brodhead. Visitation will be held from 4 to 7 p.m. Sunday, February 13, at the D.L. Newcomer Funeral Home, Brodhead and from 10 a.m. until time of services at the church Monday. In lieu of flowers, memorials may be made to the Brodhead E.M.S., Albrecht Elementary School library, and the Brodhead United Methodist Church.

Helen Rose Markham, age 81, of Brodhead, passed away on Thursday, February 10, 2011, at the Monroe Clinic Hospital. She was the youngest daughter of Fred and Louise(Kueng) Gerber, born March 5, 1929 in Brodhead, Wisconsin. Helen was proud of... View Obituary & Service Information

The family of Helen Rose (Gerber) Markham created this Life Tributes page to make it easy to share your memories.

Helen Rose Markham, age 81, of Brodhead, passed away on Thursday,...