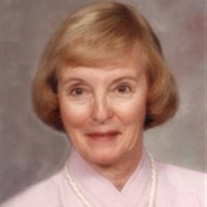 Brodhead - Helen (Stettler) Timm, age 76, passed away on Monday, August 22, 2011, at her home, after a lengthy illness. She was born on January 23, 1935 at the Otter Creek Cheese Factory, Davis, IL, the daughter of Walter and Elizabeth (Ruef) Stettler. She married Bruce Timm on August 29, 1954. They were the first couple to be married in the sanctuary, which is now the United Methodist Church of Brodhead. Helen�s early years were spent in Davis and on a farm outside of Juda. She was valedictorian of her class at Juda High School in 1953 and continued her education in Minneapolis. Upon graduation, she was employed by Dr. M.W. Stuessy as a lab technician. For many years Helen was the quintessential stay-at-home mom. Nothing was more important to Helen than her family and their activities. Whether it was the children�s sports, music, or academic endeavors, Helen was always present and supportive, even through their college years. For several years, Helen also successfully owned and operated Calico Corner, a craft shop representing over 125 crafters. Music was a special love of Helen�s. She was a multi-talented individual, but perhaps one of her greatest and most proud achievements was the accompanying she did for WSMA solo and ensembles. She began accompanying when her children were in middle school and did so continuously until her grandchildren were in middle school. Helen also sang in numerous barbershop quartets, most notably The Generation Gap, with daughter Nancy, Mary Milks, and Connie Sue (Milks) Prochnow. Helen directed and accompanied children�s and youth choirs at church as well as the senior citizen�s choir, �Saints Alive.� She was formerly a member of the adult choir at the Brodhead United Methodist Church. Helen was also a very popular performer each winter at Gulf State Park in Mississippi where she and Bruce wintered for many years, singing, yodeling, and playing her accordion, as long as her health permitted. Helen suffered hemorrhagic strokes in May of 2003 and again in September of 2005. Most recently her battle was with Alzheimer�s disease. Helen is survived by her husband, Bruce, sons, Philip (Mary Jo), Janesville, David (Diane), DePere, daughter, Nancy (Brian) Farrell, Lowell, AR, foster daughter, Jocelyn Lamb, Beloit, AFS daughter, Lena Tromvoukis, Greece, brother, Eugene (Barbara) Stettler, Idaho, sister, Sally Waller, Durand, IL, grandchildren, Patrick, Katherine, Paige, Michael, Jacob, Claire and Madeline Timm, Christopher Farrell, step-grandchildren, Christopher and Megan Offerdahl, step-great-granddaughter, Sophie Offerdahl, and a host of aunts, uncles, cousins, nieces and nephews. She was preceded in death by her parents, and a grandson, Jonathan Timm. Funeral services will be held at 11 a.m., Thursday, August 25, 2011, at the United Methodist Church, Brodhead, with Pastor Ellis �Hap� Itson officiating. Burial will be in Greenwood Cemetery, Brodhead. Visitation will be held from 6-8:00 p.m., Wednesday, August 24, 2011, at the D.L. NEWCOMER FUNERAL HOME, BRODHEAD. Memorials in Helen�s name may be made to HospiceCare, Inc, by mail, at 5395 E. Cheryl Parkway, Madison, WI 53711 or online at www.hospicecareinc.com. The family wishes to thank Clyde and Beverly Curtis, Ruth Meyers, Jean and Cal Wickline, Carole Campbell, Dr. Kevin Bluemel and his staff, Meals on Wheels, and Hospice Care, Inc. for the excellent care and assistance each of them provided

Brodhead - Helen (Stettler) Timm, age 76, passed away on Monday, August 22, 2011, at her home, after a lengthy illness. She was born on January 23, 1935 at the Otter Creek Cheese Factory, Davis, IL, the daughter of Walter and Elizabeth (Ruef)... View Obituary & Service Information

The family of Helen (Stettler) Timm created this Life Tributes page to make it easy to share your memories.