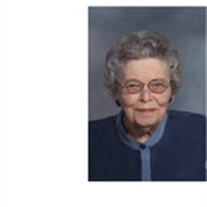 Brodhead - Helen E. Deppeler, age 94, of Brodhead, passed away on Friday, June 4, 2010, at Wood�s Crossing Nursing Home, Brodhead. She was born on April 20, 1916, in Spring Grove Twsp., Green Co., WI, the daughter of Manley and Clara (Johnson) Woodward. She married Fred W. Deppeler on October 24, 1935 in Rockford, IL. He passed away on August 24, 2004. Helen farmed with her husband in Spring Grove Twsp. until moving to Brodhead in 1961. She had worked for the former APCO Mfg of Brodhead. Helen was a 4-H leader for many years, a member of Spring Grove Friendly Farmerettes, and the Congregational United Church of Christ, where she taught Sunday School. She loved reading, flowers, sewing, and crafts. She is survived by a son, James (Donna) Deppeler, Windsor, WI, two daughters, Marjory Wendler, San Antonio, TX, Kathryn Brokaw, Cedar Rapids, IA, a brother, Merrill (Helen) Woodward, Fitchburg, WI, a brother-in-law, Robert Buehl, Monticello, WI, a sister-in-law, Marion Deppeler, Brodhead, a special family friend, Robin Wallenton, Brodhead, 13 grandchildren and 17 great-grandchildren. She was preceded in death by her parents, husband, sister, Ruth Buehl, and a son-in-law, Charles Brokaw. Funeral services will be held at 11:00 a.m., Tuesday, June 8, 2010, at the Congregational United Church of Christ, Brodhead, with Pastor Kerri Parker officiating. Burial will be in Greenwood Cemetery, Brodhead. Visitation will be held from 9:30 a.m. , Tuesday, until time of services at the church. Memorials maybe be made to the church or a charity of your choice. The D.L. NEWCOMER FUNERAL HOME, BRODHEAD, WI, is assisting the family. A special �thank-you� to Wood�s Crossing and their staff.

The family of Helen Edith (Woodward) Deppeler created this Life Tributes page to make it easy to share your memories.