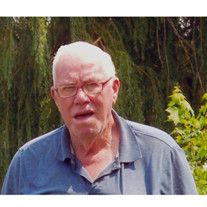 Herman L. Clegg, age 84, of Brodhead, passed away unexpectedly at his home on Thursday, December 22, 2016. He was born on March 31, 1932 in Nabb, IN, the son of Carl and Ella (Zolman) Clegg. He married Charliene Cole on April 7, 1956�in Jeffersonville, IN. Herman graduated from Lexington High School, Lexington, IN. He served in the U.S. Air Force during the Korean Conflict from July 22, 1952 until 1955, and was a member of the VFW. He was discharged in 1956. Herman had worked as a truck driver for JATCO�of Janesville, WI, retiring in 1992. Herman and his wife had also lived in Mesa, AZ. He enjoyed playing horseshoes, camping and especially spending time with family. He is survived by his wife, Charliene, Monroe, WI; his children, Charles (Cindy) Clegg, Milton, WI, Patricia (Garry) Scribner, Bancroft, MI, Deborah (James) Kamps, Brodhead, WI, Melvin (Sheila) Clegg, Chippewa Falls, WI; siblings, Dale (Pat) Clegg, Columbus, IN, Betty Barnard, Scottsburg, IN, Rose Wininger, Henryville, IN; eight grandchildren and several great-grandchildren, He was preceded in death by his parents, two brothers, Albert and Carl, Jr.; and two sisters, Frieda Close and Frances Stoffregen. Memorial services will be held at a later date. Burial will be in Northern Wisconin Veteran's Memorial Cemetery, Spooner, WI.�

The family of Herman Leslie Clegg created this Life Tributes page to make it easy to share your memories.

Send flowers to the Clegg family.