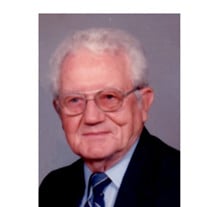 Homer L. Lindsey, Jr. age 93, of Baraboo, WI, formerly of Brodhead, passed away on Wednesday, December 28, 2016, at Meadow Lane Assisted Living, Baraboo, WI. He was born on July 7, 1923 in Lake Forest, IL, the son of Homer and Isabelle (Reynolds) Lindsey, Sr. He married Edna E. Kjesbo in 1947 and later moved to their farm east of Brodhead in 1954. She passed away on April 11, 2007. Homer attended Bethany Lutheran Church, Brodhead. He had worked as a machinist at Beloit Corp. for 33 years, and also farmed He had served in the Army Air Corp during WWII. Homer and his wife enjoyed traveling and spent 13 years in Arizona during the winter months. Homer enjoyed gardening, hunting, watching the Packers. He was a great fan of the former coach, Vince Lombardi. For several years, Homer cared for his wife when her health became impaired. He is survived by his children, Karen A. Lindsey, Huntley, IL, Patricia L. (Terry) Gardner, Independence, IA, Debra E., (William) Johnsen, Baraboo, WI, William A. (Penny) Lindsey, Roscoe, IL; seven grandchildren, Deanne Hicok, Travis Taylor, Ryan, Adam and Ben Lindsey, Michael and Lindsey Johnsen; and several great grandchildren. He was preceded in death by his wife, son, Michael Lindsey, two sisters and a brother. Funeral services will be held at 11 a.m., Saturday, December 31, 2016, at the D.L. NEWCOMER FUNERAL HOME, BRODHEAD, WI, with Rev. David Frey officiating. Burial will be in West Luther Valley Cemetery, rural Brodhead with military rites. Visitation will be held from 9:30 a.m. until time of services at the funeral home. In lieu of flowers, memorials may be made to Bethany Lutheran Church, Brodhead. The family would like to thank Meadow Lane Assisted Living of Baraboo for their excellent care of Homer.

The family of Homer Lee Lindsey, Jr. created this Life Tributes page to make it easy to share your memories.

Send flowers to the Lindsey, family.