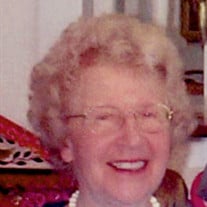 �Irene Blackford, age 97, of Brodhead, WI, passed away on Tuesday, December 29, 2015, a her home. She was born on July 18, 1918 in Decatur Township, Green County, WI, the daughter of Major Judson Boardman and Myra (Dunaway) Blackford. Irene was the youngest of nine children. Both of her parents were descended from early Green County settlers. She attended a one-room rural school and graduated from Brodhead High School. Irene was an excellent student and always maintained a high grade point average. She obtained a B.A. Degree from UW-Madison, graduating with honors, and followed this with a Masters Degree in Library Science also from UW-Madison Library School. After seven years at the Lima Public Library in Lima, OH, Irene returned to Wisconsin. She was employed by the Janesville Public Library for the next twenty-eight years, first as a reference librarian and for the last eleven years, the director. Her tenure as the administrator was marked by the move from the old Carnegie Library to a new building, and by the beginning of the Rock County Library System for which Janesville and Beloit were named �Libraries of the Year� She retired in 1977 and returned to Brodhead ten years later, where she remained until her death. Irene enjoyed her Whitewater Lake cottage for many years. She had a keen interest in politics and world affairs and was a past member of the League of Women Voters and the American Ass'n of University Women, as well as the Wisconsin Library Ass'n and the American Library Ass'n. She was also a member of the Paper-Weight Collectors Ass'n for many years, and enjoyed collecting the work of both antique and modern glass artists. Irene is survived by two nieces, Nancy Tierney and Carol Anderson Condon; four nephews, Dennis (Lani) Tierney, Clifford (Susan) Anderson, William (Mary Jane) Blackford, and Ron (Joanne) Blackford. She was preceded in death by her parents, three brothers, Howard, Byron and Kenneth Blackford; five sisters, Gladys Anderson, Merle Fischer, Thelma Olin, Marjorie Blackford, and Irma Tierney; two nieces, Ruth Blackford Hartmann and Beatrice Blackford Marshall; three nephews, Donald Olin, Michael Tierney, and Terence Tierney. Memorial services will be held at 11 a.m., Friday, January 8, 2016, at the D.L. NEWCOMER FUNERAL HOME, BRODHEAD, WI. In lieu of flowers, memorials can be made to the Brodhead Public Library.�

The family of Irene Blackford created this Life Tributes page to make it easy to share your memories.

Send flowers to the Blackford family.