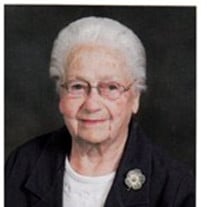 Brodhead - Irene V. Jensen, age 92, of Brodhead, passed away on Sunday, March 10, 2013, at Collinwood Group Home, Brodhead. She was born on March 3, 1921 in Beloit, WI, the daughter of Robert and Marie (Busker) Ross. She married Clifford L. Jensen on April 27, 1941 in Beloit. He passed away on September 28, 1997. Irene, along with her husband, farmed in Spring Valley Township from 1947 until retiring and moving to Brodhead in 1972. At that time, Irene started a new venture as a waitress for Clyde Harris (Harris House coffee shop), where she served many cups of coffee and lunches for 20 years. An additional four years at the Country Gardens concluded her waitressing career. She was a member of the United Methodist Church, Brodhead. She is survived by a daughter, Gloria Reichenbach, Janesville; a son, James Jensen, Weippe, ID; two sisters, Marie Dorothy (James) Leppla, Rosemary Ronan, both of Beloit; a brother, Don Goldsmith, Janesville; a sister-in-law, Pauline Schulz, Brodhead; three grandchildren, Cass Reichenbach, Janesville, Jed Jensen, Portland, OR, Bonnie Jensen, Portland, OR and Hawaii; three great-grandchildren, Daelyne Reichenbach, Janesville, and Cole and Eloise Jensen, Portland, OR. She was preceded in death by her parents and husband. Funeral services will be held at 11:30 a.m., Saturday, March 16, 2013, at the D.L. NEWCOMER FUNERAL HOME, BRODHEAD, with Rev. Ellis �Hap� Itson officiating. Burial will be in Greenwood Cemetery, Brodhead. Visitation will be held from 10 a.m. until time of services at the funeral home on Saturday. The family wishes to thank the kind and loving staff at Collinwood Group Home and Hospice Care nurse, Lisa Anderson, for the wonderful care they gave Irene.

The family of Irene V. (Ross) Jensen created this Life Tributes page to make it easy to share your memories.